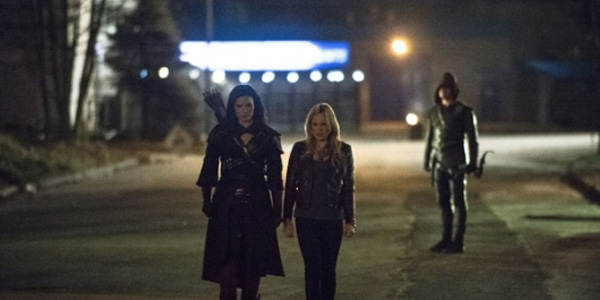 The League is back for Sara, can Oliver save her before they kill her and the rest of the Lance family?

This was a Sara focused episode, with the flashbacks filling the audience in on things that happened to her before the boat trip. It was a good episode this week that filled fans a little of her time with the League, and her history with Ollie.

Nyssa al Ghul, first daughter to Ra’s al Ghul, is in Starling City to bring back Sara, but Team Arrow has no plans on letting that happen. Nyssa tries to talk to Sara, and reveals that they are more than just friends, they were lovers. Sara still has feeling for her, but her only concern is her family, and that means leaving the League. It seems the League has a policy on not letting member go after another Starling City citizen left and ended up leveling half the city. Nyssa is left with very little choice and decides to take matters into her own hands and kidnaps Dinah, forcing Sara to choose, her family or the League. Sara also learns that it was Nyssa who poisoned Laurel last week, bringing her close to death and sending her to hospital. When it came time to making a choice Sara choose her family over the League, and took the same poison that was given to Laurel. It put the choice in Nyssa’s hands, her love or her Father’s League. In the end Nyssa choose Sara, but won’t be the last we heard from the Demon’s Head I’m sure.

Ollie also had a lot to deal with in his own family this week. Felicity learned of Thea’s real father, and took the news to Moria. Although Felicity thought she would do the right thing and tell Oliver, Moria surprised her and threatened her to keep the secrecy instead. Felicity’s loyalty and feelings were put to the test, but in the end she told Oliver, wreaking the mother son relationship maybe forever.

This week was filled with little reverences from the League and former mentions but nothing new to the Arrow world.