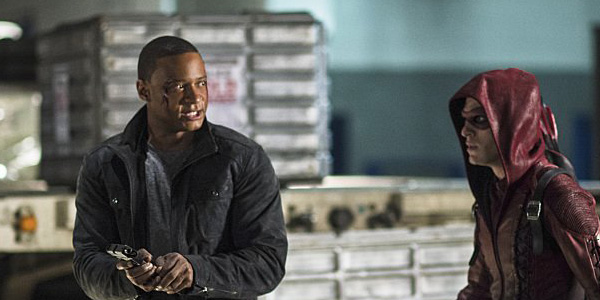 Starling City is missing a hero as Arrow returns to the CW from the winter break.

It has been about 4 days when the episode starts since Oliver went to fight Ras, and no one knows the outcome of the fight. But just because the Arrow is out of the city does not mean his crew can’t keep up taking guys down. Roy along with a green hooded Diggle are chasing down thugs, and helping Lance catch put them away. While Roy and Diggle hold out hope hat Oliver will return, Felicity is falling apart inside. She is putting up a good front for most of the show, but when Merlin brings back the bloody sword she loses it. Making choices to protect her friends in the field by letting the bad guys get away, shutting down the “Arrow Cave”, and going off on Ray for wanting to be a hero all leave her raw and a mess. While we as an audience know Oliver will be back, she is getting to her breaking point.

Meanwhile in the flashbacks Oliver is tasked by Waller to track down the Alpha, the key to using the Omega. He is able to get it and help his friends in Hong Kong, by planing a tracker on China White’s men to help lead him back to her and rescue the future Outsider. His actions in Hong Kong save his present life. While bleeding out and freezing on a cliff it’s Maseo who carries him to a cabin where Tatsu is waiting to bring our archer back from the dead.

While all the action was going on a few comic nods popped up in the show.