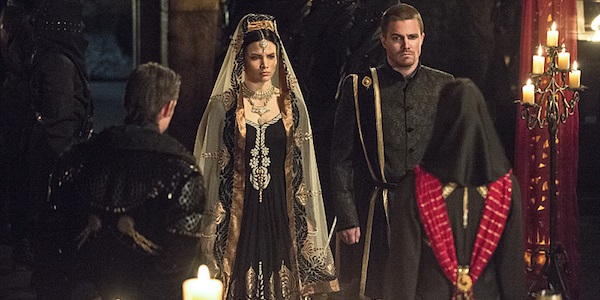 This week’s Arrow brings back a little bit of hope, but is still dense with drama.

“This is Your Sword” really improves upon “Al Sah-Him” in a multitude of ways. The tension occurs more naturally instead of being forced by soap opera type dialogue, the big fight scene at the end is entertaining, and it reestablishes the team. It still has its fair share of drama, but the positive aspects of the episode manage to 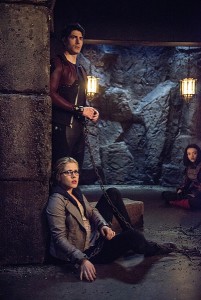 David Ramsey gives a commanding performance as a conflicted Diggle, really making use of the spotlight to deliver some heavy characterization. It has also been very rewarding to see Oliver’s evolution in the flashbacks, and witness the gradual shift in his experience. Laurel’s evolution has also been very well handled, as we’ve seen how her fight game has steadily improved with the passing of each episode. She handles herself better than ever before in “This is Your Sword,” and it’s been worthwhile to follow her on that path over the course of the season. In the stills I was wary about how Katana’s costume was to be handled, but in practice Rila Fukushima’s outfit manages to stand out, pay homage, but not go over the top with details. Admittedly it sort of came from out of nowhere, and I would have preferred a little bit of backstory on why she’s wearing that particular costume. I’m at an advantage by being a comic fan, but a casual observer might be left just plain confused by it. Despite all the season’s issues, the relationship with Maseo and Tatsu has been developed enough to have real weight at its conclusion, made all the better by Rila Fukushima’s dramatic performance.

Final Word: Admittedly the romance subplot still comes off as dry, and it looks like Felicity isn’t getting enough to do at this point, but the final fight scene has some incredibly cool moments, and a decently 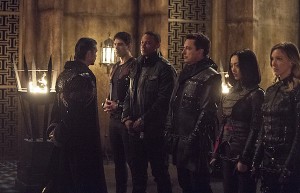 conveyed CGI extravaganza that equals some significant Atom time that Brandon Routh delivers on. All in all though, it was great to see a light shining in the story by Oliver’s double agent act, though that still doesn’t answer if he killed that guy or not. Despite being a bit forced, I was empathetic to Diggle feeling betrayed thanks to some intense moments from David Ramsey. I was sort of bummed that Thea didn’t suit up this time, but it was great to see Colton Haynes as Roy again, even if it was all too brief. I’m still not sold on the whole “destroy Starling City because” thing, but I’m still going to stick around. Now whether it’s to watch this train pull in to the station or to see it crash in to a million pieces is up to Arrow now. I have faith that they can do it, and I’m still invested in Season 4, so they must be doing something right.