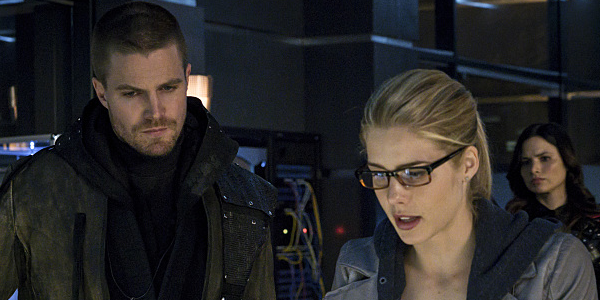 As one story ends, another must begin.

Season 3 of Arrow has been a disappointment to me personally.  Oliver’s sudden involvement with the League of Assassins wasn’t executed very well, and I’d still say The Climb was the most compelling of the season.  “My Name is Oliver Queen” isn’t on that level, but it’s still a good episode.

The thing that makes it so is the reservation that the story seems to have.  It’s very small and personal for a season finale, and focuses more on the relationships between the characters, instead of the big action set 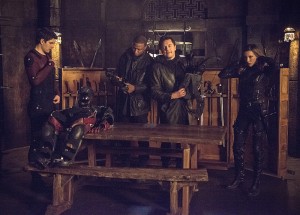 pieces.   Everything from the setup to the finale is reserved to a basic degree.  At no point does “My Name is Oliver Queen” attempt to break stride to reach blockbuster levels.  The setup occurs, a plan is conceived, then it is executed; and all the while the characters have personally affecting conversations that reflect on events in past episodes and they dynamic going forward.  I’ve been complaining about the loss of personal connections all through this season, but “My Name is Oliver Queen” thrusts them right back in to the spotlight.  It’s still too little too late to have maximum impact, but it’s enough of a step forward to have a positive influence.

The plan itself is sort of underwhelming, which is especially surprising considering how necessary it was for the series to imply how extensive the league’s resources were.  In fact, if we’re being totally honest, the league’s entire plan is weak and deeply flawed.  There are a few bright spots though, as Team Arrow works against the league in unison, with each member executing a vital part of their plan.  Willa Holland makes her debut as the fully kitted out Speedy, but only hints at a bigger role in Season 4, Diggle and Oliver’s relationship stays realistically strained, and Ray gets a small but worthy role for his character.  We also have another great theme here, as the best of intentions are crushed by Oliver’s penchant for self sabotage.  It’s a characteristic aspect of both his comic and television counterpart, and it continues to make for interesting situations in the plot, and complications in relationships.

Final Word: “My Name is Oliver Queen” is going to disappoint a lot of people.  Most of it is underwhelming, and poorly conceived.  I might be in the minority though, as I felt it was a nice change of pace for a season that has been incredibly confusing in its execution and intentions.  Personal relationships have been strained throughout the season, with most of the characters preoccupied with incredibly dramatic subplots that have 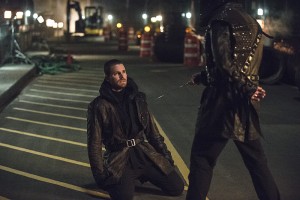 failed to capitalize on the great chemistry between the actors.  “My Name is Oliver Queen” returns that dynamic, and even remembers to provide a significant enough scene for founding members of Team Arrow, to provide some closure.  Lance and Laurel, Thea, nor Nyssa get that same opportunity, unfortunately.  The fight with Ras lacks dramatis, but it actually reminded me of Luke and Vader’s showdown in Return of the Jedi (the fight itself is overshadowed by the themes and implications behind it), so it while it was sort of anticlimactic, it had enough going for it narratively to provide a sufficient conclusion.  Barry’s involvement, while brief, makes enough sense at both its beginning and ending to not feel like a cop out.  I also enjoyed the contrast of the moral low point of the flashbacks, and the high of the modern day sequences.  It informs the amount of work Oliver has put in to becoming more than just the Starling City Vigilante.

Regardless, the best parts of the episode are still the ones that leave season 3 behind and prepare for season 4.  These allusions remain the strongest aspect of “My Name is Oliver Queen”.  Practically every character gets an intriguing jumping off point that has left me totally on board for season 4.  So, maybe “My Name is Oliver Queen” ends up just being a promise for a better tomorrow (after a disappointing season 3), but I believe Arrow has built up enough good credit to continue to be a worthwhile investment.