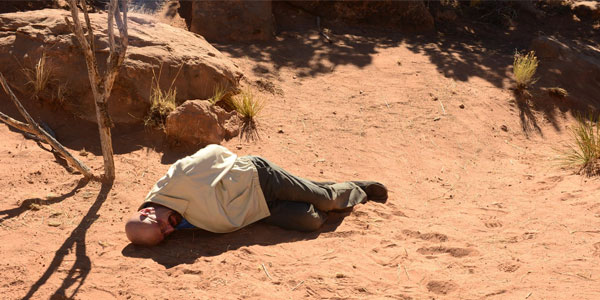 Was last night’s Breaking Bad more devastating for the characters or for the viewers?

Okay, so somehow “Ozymandias” lived up to the near-impossible hype built up throughout these final episodes of Breaking Bad.  And as we approach ever closer to the final 120 minutes of the series, things come crashing down as brutally as the title’s poetic namesake would suggest.  I’ve never had this much fun being this completely stressed out.

From the opening flashback to Walt and Jesse’s first cook, to the bullet-riddled present in the same location, the shit hits the fan early and often in this installment of Breaking Bad.  I had a feeling there wouldn’t be any way for Hank and Gomez to make it out of their showdown with Uncle Jack and his meth-peddling neo-Nazis, but somehow the death of both DEA agents still managed to be a total gut-punch. Hank got to go out like a straight-up John Wayne badass, in a death scene whose tough guy atmosphere was enhanced even more by Walt’s own emotional breakdown.

But the death of Hank was only Act One, and the episode only picked up from there.  Rian Johnson continues his winning streak as director of some of the best of the best Breaking Bad‘s, and the way he deftly maneuvers from the desert shootout, to Walt’s comical trek rolling his last barrel of money through the desert, to the straight up horror movie fate of Jesse, would be remarkable, if I had the chance to breathe long enough to really appreciate it.

There’s little breathing room these days, though.  While Walt escapes with his life and a fraction of his $80 million fortune (Uncle Jack helped himself to the rest), he takes solace in his family.  But as he makes his way back to them, Marie finally forces Skyler to let Walt Jr in on the truth, and he doesn’t take it well.  The fallout of the fact that his parents are both drug-making criminals AND liars causes Junior to lash out, but his innate decency shames his mother into finally taking a stand against Walt.

Unfortunately, that all goes down just in time for Walt to get home and try to strongarm them all into escaping New Mexico with him, about Saul’s Vacuum Cleaner associate.  And as they refuse to leave, Walt finally understands the truth…

Percy Bysshe Shelley’s poem “Ozymandias” is about a fallen empire, one that faded into non-existence.  Many of us– myself included– assumed this episode’s title would be about the complete dissolution of Walt’s own criminal empire, but that’s not it.  Walter’s own, personal “Ozymandias” moment stems from the family he finally realized is no longer his.  The Whites are not broken, they are not a thing at all.  And this causes Walt to freak out like never before, attacking Skyler, who cuts his hand open with a knife while Junior calls the police on his father.  So Walt leaves, taking his baby Holly with him.

Yes, the family Walt claims to have done all of these horrible acts in the name of is gone, eroded into nothing like the empires of old. There’s been a lot of factors that apparently play into turning Walter into the broken man we’ve seen in the flash forwards throughout this season– his heartbreaking split from Jesse, the death of Hank… but I’m thinking it’s the complete and final loss of his family that has truly destroyed him.  Despite his abominous lashing out, his conscience kicks in long enough for him to leave his baby girl for Skyler’s safe keeping, as he delivers a straight-up Scarface speech to her on a wire tapped phone, before boarding the “vanishing van” alone at the same spot where Jesse turned down his own ride a few weeks ago.

I’ve given up predicting what will happen next on Breaking Bad, but I feel like after this week, it’s evolved from having no idea what could happen next, to having way too many clear and present possibilities.  Will Walt’s life catch up to him now that he’s removed himself, or will he return home for a reason– perhaps even a bit of redemption?  Breaking Bad has a tendency to play rough, but I cannot imagine this show leaving Jesse chained up in a meth lab, being forced to cook for a gang of neo-Nazis under the threat of the death of his beloved Andrea and Brock.  And I think it was a telling clue that sociopathic Todd shed a tear at the suffering of Walt over Hank’s death… Is it possible he’s not as monstrous as we’ve been lead to believe?  “Ozymandias” may have been the most intense hour of television I have ever seen, but I feel this is still only the beginning when it comes to the end of Breaking Bad.