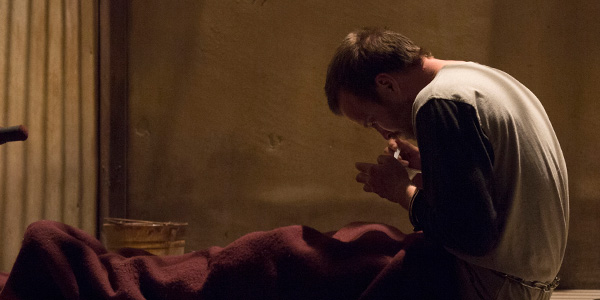 For the whole series both Jesse and Walt have tried to stay free men, never to be locked up. In the final episode before the finale both men find themselves in trapped in two very different cages.

Saul’s story for now seems to be wrapped up for the series, until his own show starts. Before his exit though we get to see one of his famous fixers. His vacuum guy who can relocate just about anyone is actually a vacuum cleaner sales and repairman. The cleaner, played by Robert Forster, is one of the highlights of the show. Not only is he able to give Saul a new life in Nebraska, but able to cage Walt at least for a little while.

Jesse is in a cage of his own underground with Todd’s family. He is forced to cook for them ,and is able to bring up the purity. Jesse is able to use a picture of Andrea and Brock with a paper clip to open his cuffs and try to escape, he makes it to the fences before he is caught. Instead of killing him Todd and company take him to see his ex-girlfriend Andrea, to watch her die. With Brock’s life in the balance Jesse has not choice but to cook for them.

Skyler also is in a tough spot, the DEA want Walt but thanks to Walt’s actions she has nothing to give them. She is forced to work a crappy job just to keep the kids. Todd decides to pay her and Holly a visit to make sure she does not give the DEA any information on Lydia. They threaten Sklyer and the kids if she says anything, and leave. Even though Todd is happy with Skyler’s answer Lydia is not, and may want a more permanent solution to the problem.

Walt has been set up in a New Hampshire cabin and surprisingly does not lose his mind. For most the the episode he journeys to the edge of his new home’s property, but turns back. Month after month Walt lives in this cage getting a monthly visits from the cleaner, with fresh supplies including chemo, until Walt finally can’t take it. He heads into town to send money to Jr for the family, from a local bar and calls his son. The call does not go as planned, and Jr tells Walt to just die, a broken man he just gives up and calls to give himself up. As he sits and watches TV at the bar, he sees a video of his former partners in Greymatter, and a fire is lit inside of him. Walt is finally able to see that even though he has done all of this to provide for his family, it was all for nothing. Everything he thought he built over the years has come crashing down, and although he is free he is still in a cage. As the cops close in on the bar, Walt is gone and it looks like Heisenberg is on the loose for the finale.