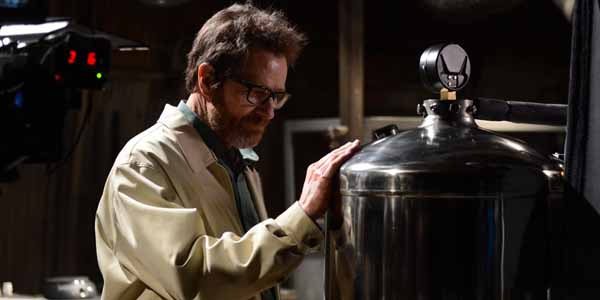 Walter White and Vince Gilligan both go out on their own terms as Breaking Bad comes to its inevitable, perfect end.

Over the last six years, Walter White has unfurled a myriad of brilliant, wicked schemes, to varying degrees of success, but until last night’s Breaking Bad finale, none were perfect.  It makes a beautiful kind of sense that his final plan, orchestrated on the fly as he makes his fateful return from New Hampshire to New Mexico, would be his masterpiece, the flawless execution that gives this phenomenal series its completely satisfying ending.

Until now, even Walt’s best laid plans were compromised with his staunch refusal to be honest with himself, who he was becoming and what he was doing.  Walt has always been shaped by the repercussions of what he did, but as he played out his end game, he kept himself out in front of it, finally willing to be honest, and to let go.

The through-line of “Felina” follows Walt exclusively, in a series of small yet important encounters with many of the story’s major players as he ties up as many loose ends as he can.  It plays out brilliantly, from his final threatening proposal to his former Grey Matter partners, to his diner ambush of Lydia and Todd, and his heartfelt final encounter with Skyler.  Each moment brings Walt closer to self-realization, and each step he takes allows him to cast off the things he obsessively held onto throughout the five seasons of the series.  By allowing Elliott and Gretchen to mule his money to his family, Walt has surrendered his ego.  By killing Jack before he discloses the whereabouts of Walt’s fortune, he has surrendered his incessant greed.  And in his goodbye to Skyler, Walt has effectively divorced himself from the family he still loves so dearly, releasing them from his shadow as best he can.

While the amazing Scarface-in-a-trunk massacre of Uncle Jack and his Nazis was a worthy show-stopper, the real culmination of this story took place in Skyler’s new apartment, and the final time Walt and his wife would see one another. “I did it for me,” Walt finally admits to Skyler of his monstrous actions. “I liked it. I was good at it. And I was alive.”  This is Walt at his closest to honest, although it’s still not entirely the truth– Walt’s “I did it for my family” mantra is NOT a lie, it was just never the whole truth.  And that expression had lost its weight over the years.  Mr. White’s most brilliant maneuver was switching which half of the truth he gave Skyler, something he could only do now as he realized he was strong enough to let go of his pride and hunger for power and need for control.  It was a beautiful scene, and it was the moment I knew where the finale would end.

That’s important when it comes to an episode like this.  “Felina” isn’t loaded with twists, turns and shockers, that’s not the story being told– Walt’s is a story of inevitability and consequences, and in the end he managed to both become aware of and steer those consequences, which lead to his own death.  The lack of eleventh hour surprises may have been a disappointment to some viewers, but it shouldn’t be.  Breaking Bad ended exactly how it played out over the past six years– a great story, well told.

Yes, the finale was filled with lots of on the nose moments– the closeup of Walt’s “Live Free or Die” license plate, his phone call damning Lydia with the knowledge that she has less than 24 hours to live thanks to his Ricin poisoning, Todd being strangled to death by the same chains that he put Jesse in weeks earlier… But each moment was so well played, so perfectly crafted that it didn’t trigger a single eye roll.  I took these scenes as deviations into a stylized hyper-reality, something that’s not new to the world of Breaking Bad.  Just like no one really speaks in monologues like the show’s best lines (“I am the one who knocks,” “No more half measures”) here, too, it’s about realizing the story in the best, most thrillingly satisfying way possible.

Vince Gilligan and his team absolutely stuck the landing, with an ending that was smart, cool, thrilling, funny and more than anything else, satisfying.  After spending all these years watching Walter White’s descent, it seems completely obvious in retrospect that what we got is the only thing we could get.  This isn’t about Walt’s punishment… and it’s not really about his redemption, either.  It’s an ending about letting go– for us and for Walter– and that sense of closure is the absolute best ending we could hope for.