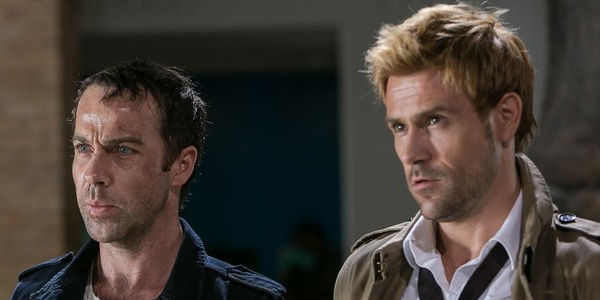 Well, they finally did it. They made an episode truly befitting the Constantine name.

Constantine has promise, but it’s gotten off to a rocky start thanks to some less than stellar…well…throw a rock. Sometimes the writing is down, and everything else is up. Other times, someone’s not putting in the performance they should, the direction is shot, but for some reason the dialogue and story is clever. Then you have the moments where everyone’s acting is right on the money, and giving out some brilliant lines, and there’s a disorienting time jump, from a scene change, that erases all of it. It just seems to jump around. It’s like everyone is passing around a stick every so often that just makes them suck at their job for a little while 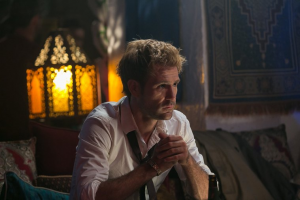 (Maybe that should be an episode. We could call it “The Short End of the Soul. Catchy, right?) A Feast of Friends definitely has faults, but at it’s heart it’s pretty clear what they are trying to do, and it’s for that reason that this was the first time I turned off my TV after an episode of Constantine feeling relief, instead of “Well then…I guess I’ll go read old Hellblazer comics to wash this taste out of my brain. ”

First, Constantine continues to suffer from awkward editing and rushed pacing. The scene transitions lack a sense of momentum, making the start of each scene feel like opening a door rather than just walking through the doorway. There seems to be a lot happening in between scenes and a lack of information on it, I’m assuming because of it’s lack of importance, does a disservice to the narrative and ruins a lot of chances for comedic or dramatic moments.  Moments which could provide entertaining commentary, witty remarks, or even points that build suspense in between scenes, and make the transition to the next shot that much smoother. The problems in editing are the real reason that the pacing seems rushed. In all actuality, the story is moving slowly enough for everything to be processed, but this block editing style that seems to be going on gives the impression that plot points are moving rather quickly. It’s unfortunately obvious when you consider that in this episode (A Feast of Friends) John actually drives to three separate locations far enough away from each other to be inconvenient, but no consequence seems to be levied for him taking up so much time traveling. It’s that lack of consequence, or the perception of consequence in the narrative, and continuity that makes the writing and direction seem lazy; and also works to destabilize the setting. A setting that is already suffering from deja vu by looking exactly like all the episodes before it. Everything seems to be filmed in either the dead of night, or that moment just before a rain storm. There isn’t enough variation in the locations to get the proper sense of scope from Constantine’s outings.

Now then, let’s focus on the good for a bit.

A Feast of Friends truly captures the Hellblazer spirit; 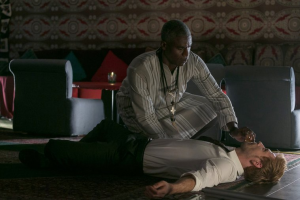 blurring the line of the good guy in John, by focusing on his penchant for having to make hard choices for the greater good. The episode is based off of the first arc of the Hellblazer series written Jamie Delano, titled Hunger. Essentially, the story is the same as the one you would find in the comic, with some slight variation here and there, and one major difference with the exclusion of Papa Midnite, but other than that most of it is verbatim. This episode takes a much more interesting approach by putting John on a case by himself. And it’s just perfect! John moves at lighting speed through the crime scenes grabbing up evidence and asking questions. Without a sidekick to hold him back, John is able to do his thing with proficiency, and have a little fun while he’s at it (you know which scene I’m talking about). Which means the audience is having fun watching him. Zed’s character isn’t exactly there yet, and while she’s strategically sound to have on the team, her presence leads to a lot of unnecessarily clunky exposition that kills the mood faster than you can say omittamus. This time, John’s humor hits an irreverent chord that works for his character better than the “goofy because it’s weird” thing from the last episode. No Chas in this one at all, but Zed (despite her position of babysitter) has some very interesting scenes involving her powers (that are awesome as always) which add a whole avenue of possibilities for future storylines involving them. The true star of the show though is Gary Lester (Jonjo O’Neill) and Constantine’s relationship. It’s vital to the story (past, present, and future) and their interactions, all the way up to their final scene together, which carries with them deep and dramatic feelings of loss, pain, addiction, exploitation, duty, and regret. The last leg of the narrative is spent on establishing the two’s relationship (since not enough time is spent earlier in doing that). As a r 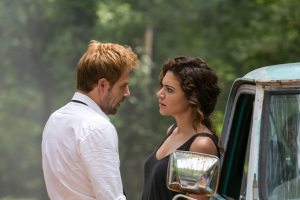 esult, the ending is haunting, violent, and incredibly Hellblazer. Making the two characters stay on screen for the last part of the episode was a cheap trick to remind the audience of their relationship (which had been sort of ignored up to that point), but it was worth it to get the punch to the gut that was the heart wrenching final scene.

A Feast of Friends is decent. Then it gets good. Than it gets insane. Than it gets Hellblazer, and that’s the right place for the show to be. The story craft and how it’s conveyed needs to be modified to be able tell the story that they want to, but this episode proved that that story is worth it. The makeup effects are phenomenal as always, but the CGI steps up it’s game in the form of terrifying swarms of bugs (you were expecting a giant fly in a church?) and an incredibly trippy dream sequence that has to be seen to be believed (It’s like something out of Aronofsky). Hunger (the comic story that this week’s episode is based off of) was John’s first outing in his own series (Hellblazer), so it was kind of important to get it right, and I honestly would have to say that even though it’d still be better to read the story in the comic first, the show does pay the appropriate homage to it. The character of Zed still needs some development to really carry the weight of requirement in the show, but for now her presence is still a merit to the show, rather than a detriment. This is Constantine’s best episode yet, and though that’s still far from perfect, it’s still the most representative example of who Constantine is, and how that affects the few people he decides to keep around him.