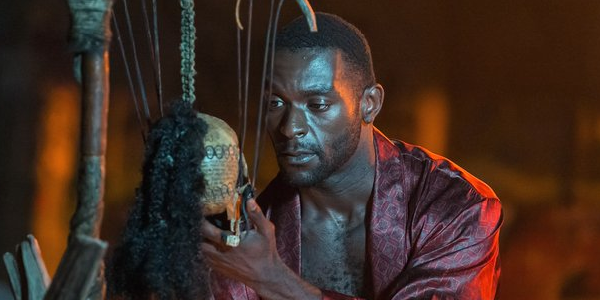 “Danse Vaudou” gets back to business with an episode featuring a minor monster of the week, some away team action, and a whole lot of trust issues. Of course the geek round table has only one subject on their minds relating to this week’s Constantine, and that’s a little known detective by the name of Jim Corrigan(aka DC Comics original Spectre) played by Guardians of the Galaxy’s Emmett Scanlan. It’s an appearance that has been teased for quite a while, and is actually kind of a big deal considering that this is the character’s very first live action treatment, which is sadly underwhelming. His character’s personality and inner darkness is rife with speculation, but his character development is practically nonexistent. This is his first appearance in the show, and there’s even a tease to his future persona that stole away a few breaths from all the old school JSA appreciators (and me…), but it’s in no way an origin story. Scanlan spent most of the time sitting deadpan in the background which is a waste of the intensity potential he showcased in Guardians, and considering his character’s evident reluctance to believe anything Constantine says, he sure comes around quickly in that interrogation room. In fact, most of the time his presence in scenes is simply unnecessary; and unless his story is picked up in a future episode, it was ultimately unfair to the fans of the character to use him this way.[Just discovered that Jim Corrigan will indeed be back in next week’s episode, “Rage of Caliban”, hopefully there’s a little more development for this classic character in this one]

Jim Corrigan as the Spectre, by Alex Ross, via Comicvine.com

Alright, there’s an entire paragraph dedicated to Mr. Corrigan, I think that’s enough. Let’s move on to the bulk of the plot. The episode has some great dialogue between the characters (John, Zed, and Chas) who’re improving their chemistry significantly by continuing to work on their onscreen dynamic. The opening scene is entertaining, and fun loving, and (surprisingly) natural. The dialogue flows a lot better as they(*heavenly chorus*) banter. It’s pretty light considering, how heavy the rest of the episode is, but it sets in motion the intellection of making the audience believe that the characters actually WANT to be around each other. So things are fun, right? 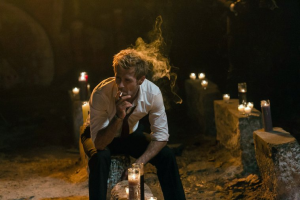 Well yeah, until the characters split up. Then everything sort of goes to the dogs for a bit. Then it’s a whole bunch of fast cuts that inform on the subject of the plot, but don’t utilize the wit and the wisecracks of the characters interacting with each other. The interview scenes are a necessary part of any procedural drama (make no mistake, it is a procedural), but the characters’ mannerisms seem to take a backseat in these scenes, leading to all the exposition with none of the personality. Then Papa Midnite comes in, and things get fun again as John and Midnite bicker, banter, and berate each other with each character’s background and ego clashing with the other’s, revealing the conflicting ideologies of both of them and simultaneously getting straight evidence as to why other members of the magical community hate Constantine so much. There’s enough of a contrast between the two, with faith VS function, giving both of them a lot more life by utilizing these differences to create the impression that the interactions between them have revealed more about both of them, therefore making the characters more complete from a development standpoint. In all actuality, very little is revealed that isn’t already known, but this insight in to both of their minds is invaluable in further storylines (Street wizard. Great line, Midnite) The ending was great in concept, but unfortunately the same problems with pacing, timing, and editing ultimately smashed the finale in to submission until it was completely underwhelming.

It was a shame, because at the beginning it seemed like Constantine had found it’s groove with “Danse Vaudou”, but it’s still not quite there. It’s not leveraging it’s best assets or taking better care to time the pacing of the plot (as a result, the ending seemed rush), or working to segue in between scenes with large time gaps 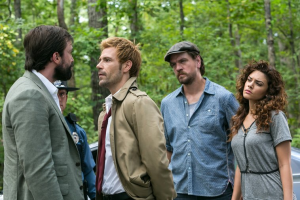 (Oh! I guess it’s night now). Constantine is still having identity issues, which in the case of “Danse Vaudou” made the first act completely out of sync with the second and third. Originally the episode was displaying confidence and wit, but then went in to a police procedural, and finally ended as a buddy cop flick. All of which are great genre’s for the series to utilize, but the lack of any solid focus of “Danse Vaudou” made it seem uneven and disorienting. It was like a weeble wobble. It starts up, and gets knocked down, and comes right back up, only to be knocked down again, and so on and so forth. Though not actually a bad episode in terms of plot or acting, it still suffers from terrible editing and unfocused direction and writing. I’m not sure I know what Constantine is yet, but I think the show itself might be even more confused than I am, at this point.