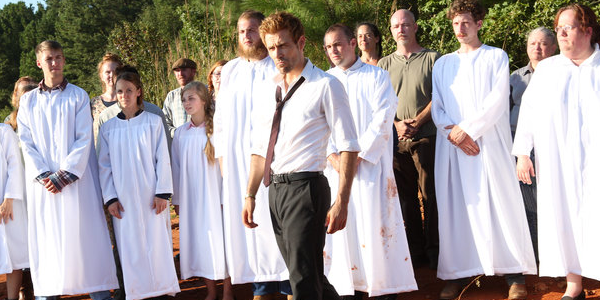 Blessed are the Damned is a few potentially brilliant ideas buried in the muck.

Had high hopes for this week’s Constantine after hearing good things. But it ended up being unfounded when I finally sat down to watch it.

The opening of Constantine relating to the preacher is appropriately creepy and uncomfortable and equally intriguing and imperceptible. Matt Ryan continues to be the brightest spot of the entire show, but Angélica Celaya finally gets a good episode, for her character, that’s more focused on her own perspective and 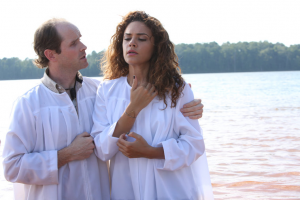 personality rather than her ignorance and inexperience. There’s a genuinely funny exchange at the beginning between her and John that dispensed with the forced sexuality, and focused instead on the irreverent brand of humor that they both share. They finally draw attention to why Chas is missing, but I’m still unsure as to why Chas and Zed aren’t onscreen together more often. Things sort of drag on after that as they do the typical investigation part of the episode, and there are some incredibly interesting debates between Zed and John regarding faith that reveal significant portions of their own opinions that do a great job of providing more insight in to their mindset (especially Zed’s); but for the most part, things don’t get actually interesting until John finds out exactly *how* the preacher is able to heal people. The answer is a great plot device, that would be even better if it had been handled with a little more subtlety. Then lots of people die…like usual.

Credit where it’s due though. Manny reveals some information about his own desires. It’s invaluable, and makes his character much more interesting. It’s also very characteristic that he only reveals himself to another angel, which confirms that John’s perception of his kind isn’t entirely inaccurate. Manny’s jealousy is taken right out of Dogma, but it’s made no less impactful thanks to a strong performance from Harold Perrineau. And of course I would be 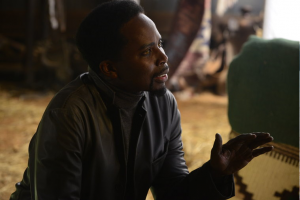 remiss if I didn’t mention the AMAZING twist that happens toward the end. It came right out of left field, and just tied things together really tightly and set the atmosphere ablaze as the entire dynamic of the episode’s story suddenly shifts unexpectedly.

But it’s all for naught, because it doesn’t save the rest of it. that’s pretty much everything you’ve come to expect from Constantine(not as much of a compliment as I wish it was). There are the obvious horror cliches (the hospital and the street) as ordinary people are just murdered without mercy because of stupid decisions that bring them in to situations that will lead to them being murdered (I’ve never seen that guy before. I wonder what he…oh.). The pacing of the story is still abysmal, the editing is killing any chance of impact in the direction, and the horror has become so incredibly dull that not even the great makeup effects can save it (At least before they were focusing on the animalistic and unnatural parts of their monsters by using CGI and camera tricks to make their creatures seem like they aren’t following the same physical rules as the human characters, but now they aren’t even bothering to fabricate their monsters by just getting the actors to try and move and act like they are creepy, and it’s just not working.).  There’s a reference to Zed’s past, that also calls attention to her origin in the comic, toward the end of the episode that could be potentially interesting; but besides that, I’m sorry to say that a weak effort from a production stand point kills a decently written script for Blessed are the Damned. I hate to see Matt Ryan’s Constantine go and some of the other characters could get a lot of life if they weren’t being underrepresented, but it’s getting harder and harder to fight for the rest of the show.