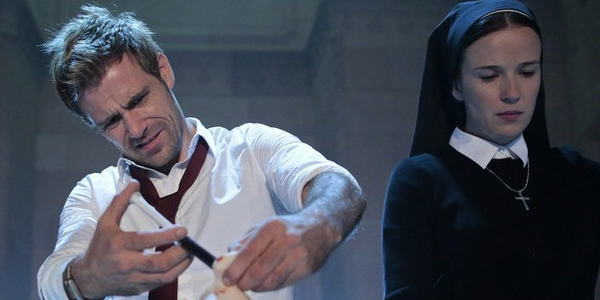 The Saint of Missed Opportunities.

Why? Why do they they hate Hellblazer? Look, I’m going to be perfectly honest here. At this point, I’m mostly seeing flaws in a show that I, for some reason, keep coming back to out of a misplaced sense of optimism. So we’re gonna switch things up and do the good first. 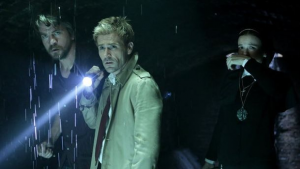 Good Direction. The askew camera angles created an unsettling atmosphere, that really set the mood. Matt Ryan as Constantine nails it, once again. He does fall flat at times, but so does John, so it fits his character. Charles Halford as Chas is always a welcome edition to any Scooby mystery. And an interesting side character with a great history with John named Anne Marie (she’s changed quite a bit from the comics) brings the Newcastle event to the front row, where we get a little bit more information, and even the name of the last person in the crew. Angelica Caleya gave a great and very natural performance as Zed, with a potentially interesting character arc that takes advantage of her comic book history. And of course, great makeup and CGI effects made the monsters truly terrifying. The villainess was designed very simply, but was just off enough to be disturbing. The real praise goes to the thing in the sewer (not gonna say that name). The use of CGI created a really unnatural look and movement that made the creature look like something out of the nightmares of children who stayed up too late and watched Pan’s Labyrinth. It had it all.

It’s not all on the editing of course, the writing has to bear some of the weight of that massive cross that is poor pacing. It happens in practically every single episode. They mess up the investigation! It’s supposed to be the most interesting part of a detective show, to see them gather information and try to solve the puzzle with them. Watch practically any episode of Constantine thus far and tell me what you find. There comes a point where the show just gets tired of trying to figure out it’s own mystery and just goes right to someone with ALL of the answers! It’s makes all of the scenes before absolutely worthless! You know what would have changed this episode entirely? If Hugo had called his grandmother after his wife died horrifically, and his son was kidnapped! I’m gonna look up how long it takes to get from Atlanta to Mexico…

John gets there when it’s day, and the event happened at night. He stays in Mexico for a day, finds the tree at night. That means two days pass before Hugo tells his grandmother (who immediately knows everything for some reason!) that his wife died. Like, it wasn’t even the first thing he said when he came in. The scene starts in the middle of the conversation. And she’s just shocked to find out! I can suspend disbelief for vampires, and ghosts, and magic houses that have magical artifacts and rooms with no floor. But if you try to make me believe that a man wouldn’t tell his grandmother (whom he’s obviously close to) that his wife died horribly for two whole days, then I’m going to assume that you think I’m an idiot. And there it is. Constantine thinks that I’m an idiot. That’s why it thinks it can get away with all the little things that make the magic happen on the show, because it’s trying to pull one over on me. It’s lazy writing, and it can’t go on. Here’s a list of questions that I found myself asking as I watched The Saint of Last Resorts.

Why is Zed benched, when she had a very good reason to go?
How did John have a pendent, that works specifically on the monster, when he didn’t know what it was and his bag can only carry so much?
Why did Zed (who is a smart, capable, resourceful, and intelligent young woman) not think that Eddie would have been followed, even knowing that he was from The Crusade?
Why did Eddie stand by and get punched, when he was not restrained or surprised in any way?
How did they miss the well?
And how does, “My wife was murdered horribly and my baby was stolen.” not get mentioned to any of your family members for two days?

Once they got the the grandma’s, what time was it? They got the call about the second baby at night, then they’re at the maternity ward at night, and when they go to the grandma’s house it’s night.  It would have to have been…like 5 AM.  Yet she looked 100% ready to accept guests.  She was even fully dressed in regular clothes, not pajamas.  Subtlties and nuances reveal the changes that betray things like the passage of time and changes in location, but they’re just missing.  The people behind the scenes don’t realize that these aspects are needed to maintain continuity.

All right, I’m being misleading, because compared to some of Constantine’s other outings, The Saint of Last Resorts has a more than decent potential mystery and monster of the week. But it’s killed the instant it starts to get intriguing by a rush to get to the climax. Which would be good, if it were built up in any significant way. Instead, Constantine is in such a hurry to tell it’s story that by the time it comes out it’s not even worth 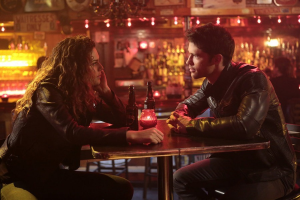 hearing. Some of this is tedium, and I get that. I’m exhausted of tuning in every week to watch one of my favorite comics get butchered right in front of my eyes. But the fact of the matter is that it’s got all these great actors running around taking everything very seriously and doing a fantastic job, and these guys behind the scenes who don’t know the meaning of the word restraint.

I WISH I LIKED CONSTANTINE! It could be very good, but it’s just…not. There’re things here that if utilized correctly could blow away an audience. There’re the scenes that you can tell are supposed to be big deal moments, and they’ve got everything it needs, but it just doesn’t mean a damn thing because all the stuff leading up to it was nonsense. No sense of adventure, no love for discovery. This show doesn’t care about the magic of the world of Constantine. The only evidence we have that something is amiss in the world is from our weekly monster and John’s constant references to the strange life that teems on the outskirts of reality, and all you can think is “Gosh, I sure would like to see that.”. But sadly, no. Instead, something killed someone, John’s gonna go to a place and do a spell, then he’s gonna get a clue, then he’s gonna go to a local with all of the answers, then he’s gonna do something he doesn’t want to do, then he’s gonna vanquish the evil, and we’re gonna go home and do it again next week. Well this time they mix it up with an ending so grave and dark that it could only come from Hellblazer,  And that would matter even more if the audience felt like it was earned. Constantine hands you this episode, on a nice plate, and it’s stiff and blackened and it tastes kind of like burnt rubber covered in hair. And you eat it, because you don’t want to hurt it’s feelings. But screw that! This has gone on long enough!

*flings plate at the wall*

Now make it right, this time.