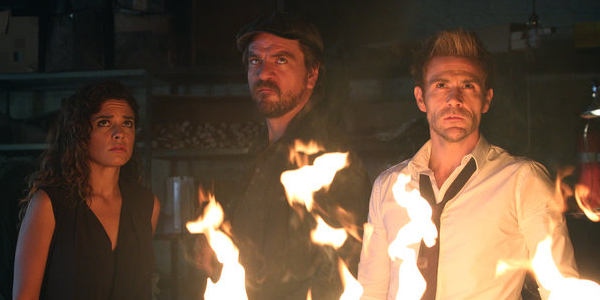 I have been outspoken at my disappointment in the TV adaptation of the comic book character of Constantine (VERY outspoken).  As a fan of the original series, I have been especially critical about how well the show has conducted it’s atmosphere and mystery storytelling so far; but I’m equally enthusiastic when I see the show succeed because I love Matt Ryan’s 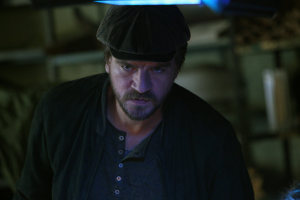 Constantine, and have a profound respect for the character of Zed and Chas (especially Chas).  So no one was happier than I was to pour a big box of Humble-O’s after watching Quid Pro Quo.  Not only does Quid Pro Quo reveal the history between Chas and John, it also puts a strong effort in to the departments of the villain’s identity and the plot.  Things are kept much simpler this time, and hits much closer to home than usual, when Chas’ daughter’s soul is stolen by a “powerful mage”.  So everything, and I mean everything, is 100% personal.  Charles Halford is overpowering as Chas, but this time he commits emotionally to the role to give a stirring performance as both the hero and the victim.  Matt Ryan switches his dynamic as Constantine to become the levelheaded counter to Chas’ emotionally compromised state in order to add balance to the “force of good” they both represent.  It’s phenomenally acted by both Halford and Ryan, and it leads to a lot of realistic drama and emotion between both of the characters.  Zed plays an integral role in the main plot, but has her best moments during the side plot (the demon Karabasan).  The villain i’s equal parts underwhelming and threatening to give the conflict a sense of grounding.  I’m now going to talk about what’s wrong, because I have to gush about something rather unprofessionally.

There’s the same problem as usual here with the editing and direction.  It’s all about timing to garner the most impact, and there’s a great many scenes that feel flaccid due to an uninspiring use of camera angles, unannounced and sudden appearances (that don’t make any sense) of characters right to where the action is as it’s about to occur, and a general lack of understanding about modern children (she shouldn’t playing with dolls! where is her i 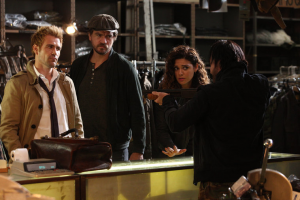 Pad?).  Also, something I didn’t notice that my girlfriend picked up on rather brilliantly when she said “You know, for being the good guys and so dedicated to the preservation of life, they don’t seem to care how many people they get killed to the save someone.” I mean I understand that it’s supposed to be in service to the theme of the “price of doing good”, but they don’t seem to react like anyone particularly affected would act if someone in front of them, oh I don’t know, suddenly caught on fire! I mean, there was no “NO!” or anything.  I just felt like the scene was just like “ah…damn…nuts….”.  It’s not even antihero behavior, it’s borderline sociopathic.  As far as the good guys are concerned, it seems like there’s a higher body count between them than between the villains, and no real steps are being taken to minimize it.  What’s so irritating is that people are going to think that I don’t get it, and this is how the theme of “the price of doing good” or “death follows Constantine” works.  But every week! He gets someone killed every week because he needs directions to like a pizza place.  He’s like if you had to sacrifice a virgin every time you used Google Maps.  It seems every time Constantine says “I’m gonna go see an old friend.” the audience is left screaming “NO! Don’t do it! He has a family!”.  I understand if it’s necessity, but the direness of the situation hasn’t been sold enough to seem worth the cost.  Getting someone killed is an end episode thing (like A Feast of Friends, the best episode of the series), it shouldn’t be delegated to the mid-story hump, it should MATTER MORE!

Alright, and now to go off the reservation…

Chas backstory is SO COOL! Not only does it totally explain his dedication to John, but also his contempt for him as well.  It emphasizes all of his behavior, and all of his guilt, and perfectly illustrates John’s irresponsibility when it comes to magic.  All in all, YES! This was the back-story that Chas deserved, and I am SO happy that it was so perfectly handled.

Final Word: Second best of the show.  Not a high bar, but still a step forward for the potential of the series.  It focuses on John as a secondary character, to put him in a less idealized perspective.  It introduces the character of…well you’ll just have to see, but comic fans will be over the moon to see another DC Universe mageling going head to head with John.  Chas gets a great origin, and Zed and John play second fiddle humbly, letting Chas play in the spotlight for a little while.  And he does a hell of a job as a sympathetic character.  There are the usual weird moments with the direction and editing that are easy to be distracted by, but overall Constantine does it right.  It’s a great episode with a lot of surprises, and a emotionally anchored plot that garners the right amount of sympathy thanks to Charles Halford and Matt Ryan’s excellent performances.  It’s not perfect, nor does it quite get the show there, but this is the right direction.  It just needs to find the right balance of hero and villain in the characters to showcase convincing (and not overpowering) antiheroes, as well as focus more on the acting and less on the spectacle of the setting.  Good step forward for Constantine, but it’s still just one step.