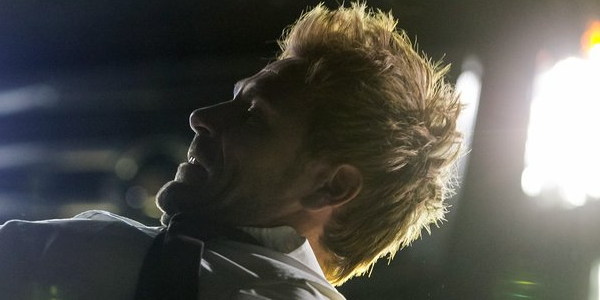 Look, I can and HAVE picked apart every part of this episode ( I have three full pages of notes), but I’m sure you’ve got somewhere else to be. Let me just give it to you straight.

The episode takes some familiar themes by including a blues musician who sells his soul to the devil, and in the middle of the collection the musician happened to be recording a song. So he unwittingly creates a device that captures the voice of the devil (Yeah…big D in episode 3.). It ends up being highly dangerous to listen to, and causes the death of one of John’s friends, putting him on the case. John follows the thread to a woman who appears to have uncovered the record for a third party, who John has a history with that could only be described as shaky.

As usual, Constantine starts with remarkable practical effects. The makeup design is a higher caliber than most TV shows like it, and is more in line with the gore-porn movies of the late 2000’s like SAW and Hostel. Building a sufficient modern horror atmosphere requires this approach, but it also makes the CGI effects stand 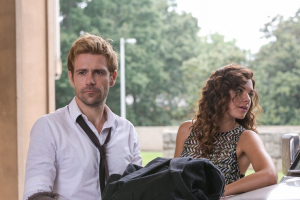 out so much more. The quality differences makes it seem even more than Constantine shouldn’t be using CGI, or should at least be using it less or to a lesser degree so the difference isn’t so obvious. The only time this direct conflict works as a benefit is during Zed’s “visions” which give off a dreamlike atmosphere thanks to the synthetic aesthetic from the CGI. Chas is incredibly regular seeming and he anchors the show, and gives the appearance of being normal, unlike John and Zed. The attempt at humor in “John learning a spell” is too forced, making it awkward instead of being shockingly weird like they were going for. It’s just too much. It’s an obvious sight gag, but everyone’s delivery kills it. The direction doesn’t prioritize the timing at any point, and the comedy elements of the episode, and I do mean all of them, fall completely flat. Zed is performing her most important duty now, by not knowing anything about what John does, therefore making him explain it to her (IE: us), but in most cases he explains a little too much with too much technicality. Matt Ryan does his best to deliver these mouthfuls, but this writing is turgid and unnatural. It’s really failing to bring up the casual side of the story and the character of Constantine.

Papa Midnite makes his debut, and comes off as sufficiently threatening, but the voice will take some getting used to. You will also get tired of hearing his laugh for sure, which he does way too often to be natural. His character’s true ability and resources (you know…the club) aren’t touched upon at any point, and never even get referenced. The true nature of the character is never really revealed, but he’s appropriately menacing, and completely open for future storylines. Hopefully they flesh out his motivation more in the coming episodes though.

This episode is bad. I hate to say it, but there is no reason for this kind of negligence in writing or direction. The story is sub-par, and heavily dependent on badly concealed cues and cliches. Attempts at humor seem like 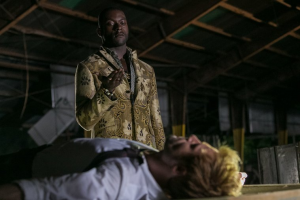 they are seen through the eyes of someone who had only read about humor, without actually knowing what it is. The delivery is atrocious in some parts, but I don’t blame any of the actors. They aren’t on the other side of the screen, watching themselves in the composition of the picture, so they don’t know how it looks and sounds in the context of a carefully designed scene. It is up to the director to say “No that sucked, we have to do it again.” It’s not an easy job to tell someone they didn’t do their job right, but it’s necessary to maintain narrative and it’s just not being done. I want Constantine to survive, but with so many fundamental problems at the ground level you have to wonder if it really should. Non Est Asylum wasn’t great, but it pushed the boundaries of the characters’ emotions to extremes. The Darkness Beneath was understated, but successfully delivered. This is something else entirely. The writing is low tier, the direction makes too many compromises, and then the editing creates scene transitions in abysmal locations, really slamming blocks down to separate scenes instead of flow in a natural and engaging way. The first round of cancellations have already started, and The Devil’s Vinyl doesn’t exactly scream “staying power”, but the characters have the ability to provide really interesting and entertaining perspectives, and the Hellblazer series has a rich and diverse roster in which to pull from. These screenwriters are pulling from stories originally told by people like Alan Moore, Warren Ellis, Garth Ennis, and Jamie Delano. With a recipe like this, there’s no reason this series should be going to hell in a hand-basket.