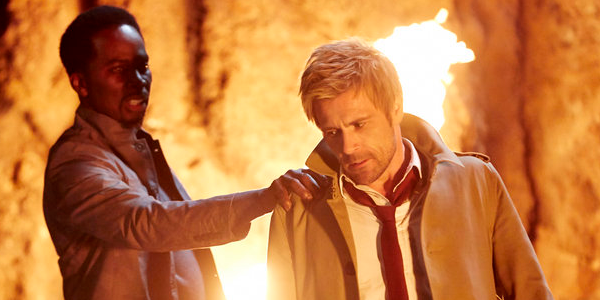 Did NBC’s Constantine premiere fly with the angels, or swim with the fishes?

Due to the popularity of both DC Comic’s Arrow and the CW’s Supernatural, mainstream audiences are finally getting a faithful adaptation of the zeitgeist of the paranormal detective in NBC’s Constantine. The amount of time that this adaptation has taken is ironic considering that Constantine (the character) has been around for somewhere around 30 years, and yet the paranormal detective formula has been used by shows like Charmed, Supernatural, Angel, The Dresden Files, and the X-Files since that time. The version of the character that non comic-book readers may recognize was played by Keanu Reeves in the panned (though not actually all that bad) Constantine movie that released in 2005. Whatever your flavor, trust me (and the rest of the comic community) when I say that John Constantine has waited long enough to get his spot on the screen. 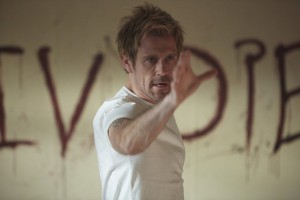 The beginning of the pilot finds John Constantine(Matt Ryan) committed to an asylum, in England, trying to forget a terrible event that shook him to his core, and damned his soul to hell. He gets a message from beyond, and heads to America with his friend Chas(Charles Halford) to protect Liv Aberdine (Lucy Griffiths) from an unknown force that seems to be after her for an unknown reason. Constantine just sees it as fulfilling a debt to a friend, but Manny(Harold Perrineau) the angel is playing the long game, and he wants Constantine kept on the board to face the sudden surge in evil activity on earth. Will the possibility that he can save his soul be enough to keep Constantine in between mankind and the darkness of the unknown?

The plot’s actually pretty standard but the performances keep audience’s attention. Constantine, in particular. Matt Ryan nails the physical aspects of the character. He’s the spitting image of his comic book persona, age appropriate and he exaggerates his movements, mannerisms, and speech pattern just enough to breathe personality in to his performance. As for the stuff that truly matters (ie: Constantine’s personality) Ryan conveys the mindset of a complex, self-destructive, broken man who’s highly skilled in his craft. He’s an unlikable ego-maniac with a shrinking list of friends, and a growing one of enemies. He uses people, drinks, and lacks sensitivity and empathy. All this is gleaned IN THE PILOT. Constantine’s character feels truly complete due to Ryan’s diligence in portrayal, and Daniel Cerone and David S. Goyer’s dedication to capturing the spirit of the graphic novel. Liv mostly just stands around, looks scared, and asks questions. She subtly shifts her performance as the episode progresses to match her accumulation of knowledge, so she’s never actually in the way or superfluous. Charles Halford’s character of Chas doesn’t get a whole lot to do or say in the pilot, but definitely strikes as the foil of the quick-witted yet slow caring John. The two high points (besides Constantine of course) are Manny the angel, who Harold Perrineau portrays as authoritative and otherworldly, and the ever underrated Jeremy Davies, who’s playing yet another eccentric genius in Ritchie Simpson.  Perrineau truly commands the attention of both the audience and the characters when he appears, and when your competition is someone like Matt Ryan’s Constantine, commanding the attention of the audience is no easy feat. It’s clear that he’s having to dial it up and shake the screen to wrestle the scene away from Ryan, but his performance is strengthened by the effort.  Davies’ scenes are shortened almost to the point of nonexistence, but the importance of his character, and his perception of John, helps bring everything to a head, albeit kicking and screaming. His trademark twitchy and nervous style works to his credit in an intense scene where the importance of the event that led to John’s voluntary commitment is further expanded on by Ritchie’s sad confession of his current lifestyle.  Everyone brings something to their character, but the show is certainly called Constantine for a reason, and Ryan reminds us of that whenever he gets on screen.  Just like the comic, it’s not just that Constantine acts like the entire world revolves around him because in this case it really does.  Everyone who shows up to add something in to the story, the plot, or the mythology is doing so from John’s incredibly sordid past.

The atmosphere of the show is well contained, and definitely succeeds as a horror setting.  The cinematography works double-time to bring out the real grit of Constantine’s world, finding plenty of real to life horror moments in general isolation and urban decay, preying on some very relatable fears.  The red-shirt body count is surprisingly high for a show like this, so the stakes are never seem miniscule.  That’s the same kind of technique that’s used in the comic to convey the seriousness of the situations the characters find themselves in, so it gets pretty much the same 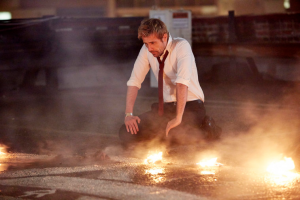 result. The pace of the episode is incredibly rushed, especially towards the end, and there are a lot of moments in which characters move great distances without a single transition, which can be disorienting.  In fact, it’s the scenes where the action isn’t barreling forward that brings out the best in the characters by (Constantine) putting them in much more natural and casual settings, without all the theatrics of demons, and glyphs, and spells.  Unfortunately these moments are few and far between, and are limited to somewhere around three points in the whole of the episode.  The conflict builds to a fever pitch, and there’s even a worthwhile scene with Matt Ryan playing two versions of John, foreshadowing the true darkness of the character, but the monster of the week actually has a pretty anticlimactic finish.  Still, the simplicity of the plot leads to character motivated moments, leaving the players with the task of driving the action forward, rather than waiting for conflicts in the setting.. And when your characters are this interesting it’s a weight that’s easily sustained.

Non Est Asylum is our first introduction to Constantine and his world (sort of), so the pressure to make him stand out is the main hurdle. And it’s one that’s cleared, thanks to Matt Ryan’s masterfully constructed performance. Everyone else brings up the rear, but never falls behind in any significant way. In fact, they all drag the lackluster plot all the way to it’s end with all the wit and blood that you’d expect (or not if this is your first introduction to him) from a Constantine storyline; but it doesn’t get boring once, because as long as one of the characters is on screen, something interesting is happening.

All in all it’s a successful adaptation for long time fans, and an intriguing introduction for newcomers. The pilot makes Constantine seem like it’s opting for style over substance.  But if you’ve got style in spades, who’s to say you can’t make up the rest as you go?