“The Magnificent Eight” is a revealing look at the evolution of the character of Rip Hunter, and a romp through the old west.

It’s filler time, people. Like Doctor Who and Supernatural before it, Legends of Tomorrow has reached its Wild West themed episode, complete with an almost obligatory John Wayne joke. The team is hiding out in a historical blindspot, to keep the aptly named group “The Hunters” from 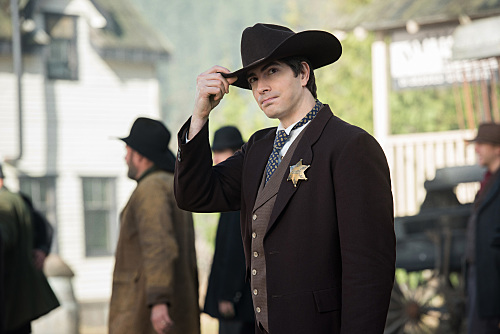 tracking them down. This blindspot just happens to be in the American old west in a town called “Salvation.” Alright, fine. Time is a big place, it stands to reason that there would be areas that the Time Masters couldn’t see. Really this is just an excuse to get some downtime, and to see Ray live out a childhood fantasy of being a cowboy; which might just be the greatest aspect of the episode. Brandon Routh is having an absolute blast as the interim sheriff of “Salvation” but what makes him most interesting is that despite his channeling of a Spaghetti Western hero, his moral code is inherently modern and makes him stick out all the more. Snart on the other hand, with his penchant for self-defense the American way fits right in to the mood as the shoot first pay the bill later type.

The episode gives a brief glimpse in to Rip Hunter’s psyche as his space-cowboy aesthetic finds an origin in a previous encounter with DC Comics’ Jonah Hex (Johnathon Schaech); albeit a much more wise and subdued version than Josh Brolin’s cowboy-Wolverine from the 2010 movie. There’s bad blood there, but also a friendship and past that definitely needs to be explored further than the 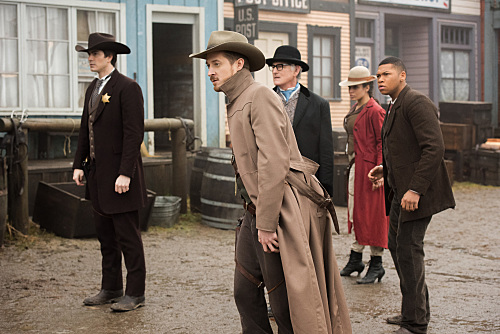 episode actually did. Kendra and Sara meanwhile go off to question a woman who has a brief but memorable encounter with Kendra in the local saloon. The identity of this woman is a fascinating aspect that reveals volumes about Kendra’s past as well as her future. It toys with ideas of fate and love, and with Caity Lotz and Ciara Renee’s chemistry keeping things entertaining and natural, it’s an easy one to stay tuned in to. There’s an important lesson to be learned from Stein saving a young boy’s life with modern means, but it isn’t well conveyed. The resolution itself works against the theme of consequences of changing history, which is unfortunately one of the series’ main themes but at the same time the identity of the boy is intriguing, even if it lacks subtlty. There’s also a weak buildup to Rip’s conclusion. It’s like he just remembered he’s no longer a Time Master, so he decided it’s cool to interfere willy nilly.

Final Word: Ray playing cowboy is exactly the kind of thing Ray does regularly. If it weren’t for the fact that Brandon Routh is having an almost criminal amount of fun I might say that it’s too silly to even be entertained by. He’s actually not bad at it. Rip’s Wild West origins make it seem like he’s indulging in the cowboy fantasy just as much as Ray is. It humanizes his character, and reveals his dedication to not just the aesthetic of the wild west, but the attitude as well. Kendra’s look at her past reveals a glimpse at her future, and just how complicated things have yet to get.

“The Magnificent Eight” gets a 7.6/10. Ultimately a great episode, but wholly unsatisfying to the larger plotline. Filler as filler can be.