As much as I enjoyed “Last Refuge,” I couldn’t help feeling disconnected.

So, The Pilgrim is tracking all the legends down throughout different points of time and killing them before they can grow up in to the super-powered time nomads they are now. The episode struggles to make this concept digestible. Yes the Pilgrim can track down and kill any of the cre 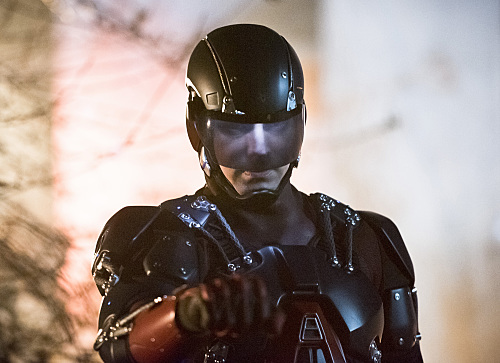 w at any time in their past, but not actually. The Pilgrim only gets one shot, and if she doesn’t succeed, then they’re safe? The exposition really lets down this part of the episode. It’s explained, basically, but it isn’t expounded upon to a point of reasonable comprehension. Speaking of exposition, I wanted to rip my hair out at the bulky line delivery in the scene involving a younger Sara and Quentin. The scene has a flimsy enough foundation without awkwardly delivered dialogue leaning directly on the struts. Don’t get me wrong, Caity Lotz and Paul Blackthorne really own this scene and fully commit to it, but there’s not a single string of coherent and natural conversation that occurs between the two while they’re in the police station.

Those are my major gripes, small as they may seem, they stood out enough to warrant that particular tirade. As for the episode’s merits, all of them are simply functional, and never do they reach past the point of just satisfa 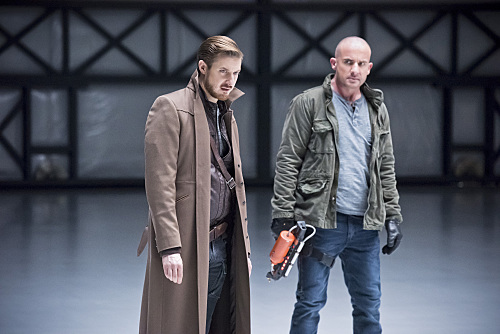 ctory. Jax meeting his father in the past is based on a concept done to death in time travel stories, but the execution gives the scene emotional weight and sincerity. I think this is mostly due to the intervention of Martin Stein, who provides us a sympathetic perspective to view Jax’ situation from. The effects from the Pilgrim’s time slowing ability also led to plenty of opportunities for static motion scenes that created inventive action dioramas with remarkable levels of detail. This of course all leading in to a conclusion that is both inventive and unexpected. Usually the conclusion is where CW’s shows fall apart, but this one actually came at me sideways. It was nice to be surprised, even if it was sort of a brutal form of justice for self-proclaimed heroes.

Final Word: You’ve heard the major gripes, so here are some minor issues I took with “Last Refuge.” The Time Masters seem like they have a word for everything, yet they use the term “younger selves” when referring to a person’s past? It kind of messed with the mystique honestly. Snart who has had the most interest invested in his past seems oddly disconnected. His constant snark relating to Rip’s past is relentless, and due to his complete disinterest in everything else going on in the episode, he comes off as more of a whiny teenager than a clever heckler. Kendra and Ray’s story lacks impact. Contextually it’s sad but it’s so weakly executed that I often forgot that they had been together two years in the show’s timeline. The chemistry just seemed off. On the other hand, Jax’ moments with his father are touching, present Sara’s interaction with Quentin is also very rewarding, and more of Rip’s past is revealed in an interesting way, yet somehow they have yet to reveal anything truly meaningful about him.

“Last Refuge” gets a 6.5/10. Often the episode plays at emotion, but fails to show it or capitalize on chemistry between certain characters. The information gleaned from the story is invaluable to the plot though, so you still can’t miss it.