Oh Legends of Tomorrow, how I love your adamant refusal to do anything similar to Arrow and Flash. “River of Time” is damn near perfect. This is a very claustrophobic episode, as it all take place on the Waverider, but that cabin fever is made all the more tense by the presence of Vandal Savage. Let me just say that I haven’t been very vocal at my opinion on Casper Crump’s Vandal Savage. If anything, I’ve found him to be quite 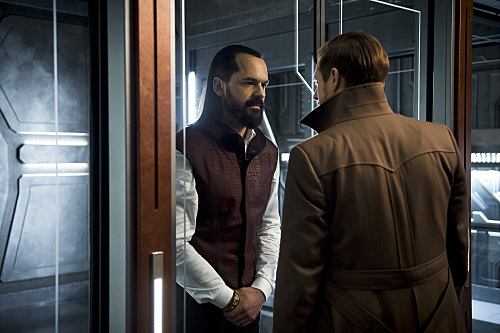 lacking in many of the principal qualities that make up Savage’s character in the comics. Luckily, “River of Time” pits him against Rip Hunter directly in an intellectual standoff that highlights layers of competition between the two. It’s enlightening for both characters as the chemistry between Crump and Darvill is in fact comparable to that of the Doctor and the Master. The exchanges between the two highlight both Hunter’s obsession and Savage’s malevolence. Rip’s single minded obsession makes him beautifully flawed once again. It is difficult to depend on his character to make the right choice, resulting in constant tension. Usually when you have a character with simple motivations such as this it’s left to be implied that they would do anything to save their loved ones. Here it is plainly laid out as a central theme rather than a character motivation. Rip’s willingness to put his team in danger to be in the best possible position to save his family does loosen the dynamic of the group, but it keeps his character centered. His drive is harsh, but very clear. Savage on the other hand acts as a nexus for all of the hostility on the Waverider. Every character’s conflict naturally leads to Savage in one way or another, making him the focal point for all of the negativity between the characters.

Every plot-point in “River of Time” has significance to the characters, and capitalizes on past and present events to give the most impact to the relationships established over the course of the show. The biggie here, surprisingly, is between Kendra and Ray; which finally succeeds in creating an emotional conflict with substance thanks to the recent addition of Carter’s latest incarnation and the confusion that it brings Kendra. The other storyline that hit some emotional high points was the brief yet powerful exchanges between Stein and Jax. Victor Garber takes center stage to deliver a few heart wrenching one-two’s, but he’s backed up beautifully by Franz Drameh’s dramatic reactions. Unfortunately, the “big twist” is 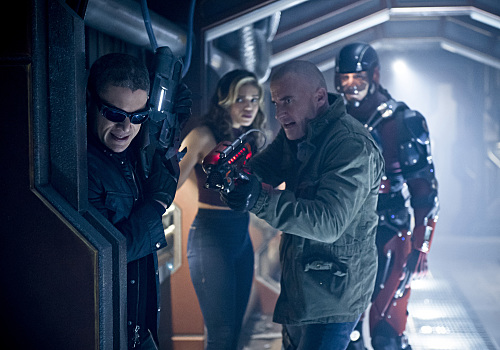 phenomenally clichéd and about as subtle as a house fire. Up until the reveal, for a solid 3 minutes, I found myself muttering the most obvious reveal I could think of. Turns out I nailed it.

Final Word: Seriously, “River of Time” kicks ass. It’s complex in its motivations but consistent. Rip and Vandal face-to-face lives up to both characters’ legends. Kendra and Ray find emotional footing that gives their story weight and Sara helps Rip come face to face with tough questions; that he might not be ready to answer. The action this time matters, and it’s all contained neatly. The big winner is the interconnectivity between Savage and the rest of the team. Everyone’s story leads back to Savage in some way, giving his character an all powerful presence rather than an implication or a role. The twist may be obvious but, visually, the Vanishing Point is just too rad to ignore. It’s interestingly designed and marvelously indicative of the show’s sci-fi sensibilities.

“River of Time” gets a 9.3/10. Legends’ characters matter, and this episode gives that fact heart as well as a brain.