Legends of Tomorrow’s 3rd episode is about the flaws inherent in those who live on the line between hero and villain.

The Legends are still stuck in the 70’s, so let’s skip all the 70’s stuff and move on to what’s new.

“Blood Ties” separates the members of the Legends in to teams of two, or in this case two and three. While Professor Stein and Ray Palmer try to find a way to save Kendra, Mick and Snart have coerced Jax in to giving them a ride to Central City for some good old fashioned crime. Meanwhile Rip and Sara are trying to hit Vandal Savage right where it hurts, the wallet.

Character drama wins the day this time around. The split means that the interactions between the characters are incredibly limited, but it also makes things between them all the more personal. Ray and Stein’s plan to save Kendra is very sci-fi friendly, and to be honest the value of the effects for this sequence are pretty top tier. What makes these scenes really work though is Stein’s role as a mentor and Ray contending with his own limits. Brandon Routh is getting incredibly good at realistic drama. He’s really come in to his own as Ray Palmer, and most of it is due to his ability to embrace his character’s flaws to 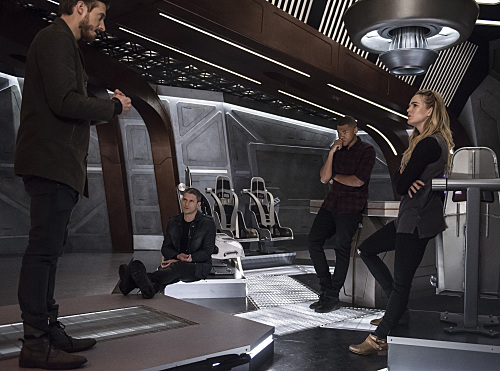 emphasize the internal conflict that he has to deal with in an intelligent and natural way. He’s actually much better as a starring member of an ensemble than he ever was as a supporting or cameo character like he is in Arrow and Flash.

Next we have the Mick, Leonard, and Jax mission; which we can really just call the Leonard mission since it actually has very little to do with Jax or Mick. This is Wentworth Miller at his best, as he puts aside his cool customer persona to get genuinely personal as he goes face to face with his own past. Nowhere is this more revealing than it is in a scene that sees him interacting with his younger self. There’s emotion and drama, but it’s the vulnerability that shows when Snart finally meets someone that he trusts. It speaks volumes about his character that the person he trusts ends up being himself.

Finally we have Sara and Rip trying to track down the origin of Vandal Savage’s fortune in order to hobble his future attempts at world domination. Lotz and Darvill are revealed to have outstanding chemistry in these scenes, and that’s the crux of what gives them so much success. The empathetic connection between the two actually keeps them on the same level, instead of having Rip lord his superior experience over her, like he has been over all the others in the last two episodes. Lotz gives an emotional performance, but also shows off her action chops in some incredibly exciting and well choreographed fight scenes that see Rip finally getting his hands dirty as well. 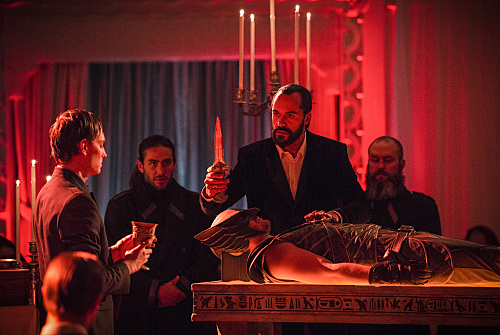 and while I still don’t think he’s a great comic book translation (He isn’t really charismatic), I finally see what they are going for with the Arrowverse’s version of the character. The truly Lovecraftian insanity of the character is fully illustrated when the cult of Savage is finally revealed. This isn’t just an implication, we are actually privy to what kind of craziness the cult gets up to, thanks to an incredibly disturbing sequence involving Carter’s body. Vandal Savage may be a bad adaptation, but that doesn’t weaken the character’s menace.

Final Word: DC’s Legends of Tomorrow has a high production value, great characters, and a much more epic scale than either of its sister shows. All this is on display in “Blood Ties,” but the character drama is phenomenally explored. The acting is all on point, but Kendra’s fevered revelations are actually sort of cringeworthy in delivery. The cues for her outbursts are apparent, and took me out of the episode multiple times. Ciara Renee more than makes up for it though in the dramatic ending, with a much more reserved attitude.

“Blood Ties” gets a 9/10: The episode was all about exploring the characters, and the fact that all of the characters experience human emotions such as shame, misery, jealousy, and fear, and those emotions are what cause the best and worst of their situations, signifies cause and effect in a way that other shows (even Flash and Arrow) often struggle with.