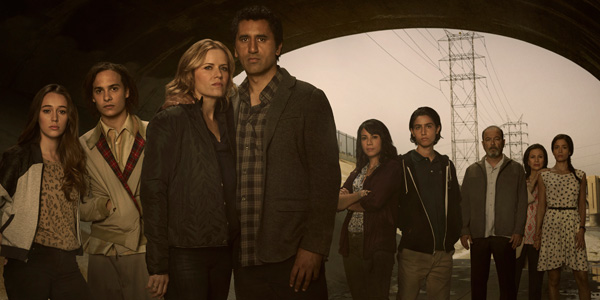 The world of zombies has expanded, and there are mixed feelings about a world at the dawn of the zombie outbreak. The show centers around the beginning of the outbreak, our world, and looks very different from what the survivors from Georgia deal with on the east coast. The show opens with Nick, one of our main characters, waking up in a junkie hideout only to find his friend eating someone. His memories are dismissed by everyone, and for the next hour that is almost the only gore viewers see.

The central family of the story is typical of today’s world, two parents that bring together two sets of kids full of drama and living normal lives. The jarring part of the show is how normal everything is in this pre-zombie world. Kids are going to school, restaurants are open and serving food, and there is LA traffic. This could be the world you see everyday. The only thing that people are aware of is a new flu going around that seems to be effecting a lot of people.

The set up of the story and the actors bring this world to life. There is not hopelessness in their eyes. People are happy, even thought the are dealing with big issues in their lives. The music in the show builds during scenes making viewers feel the anticipation, thinking a zombie will appear, but they never do. The show crafts a world we can recognize but looking in from the outside we can see and feel the danger just under the surface waiting to appear.

Fan reaction to the show has been mixed, some saying it is too slow while other welcome this fresh look at the world of the dead when people were still in control. As a pilot it is hard to judge the show, there were plenty of slow moments in Season 5 of the main show, making some turn it off, but that is not the case with this show. The writers are clearing making the gore count, and getting the viewers attached to family. When out first real look at what a zombie can do comes in the final moments of the show it’s intense. Nick and his family have no clue to jam something into the zombie’s head, in fact it’s someone they know, so they try to help. They don’t know what danger comes of contact, or how unstoppable the creature can be.

The show has me in for at least the short first season, but the question is will it be too much for TWD fans to handle with this show directly leading into Season 6 of the main show?