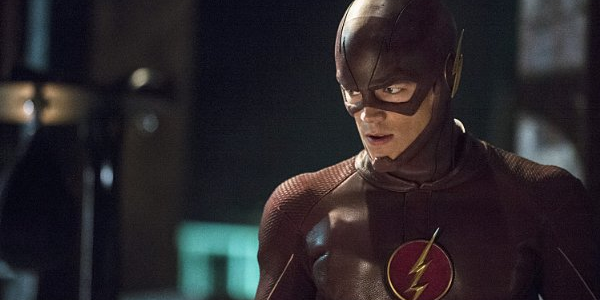 The Flash is born focuses on the theme of bullying, when Tony Woodward (guest star Greg Finley as DC comics supervillain Girder), a former childhood bully of Barry’s, goes full on “bang baby”.  He exhibits the ability to cover his entire body with living metal (think Colossus), forcing Barry, Caitlin, and Cisco to dedicate all of their intelligence and resources to figuring out how to defeat him. Meanwhile, Joe enlists the help of Harrison Wells in investigating the death of Nora Allen fourteen years ago. All the while, Iris is not only refusing to give up on writing her blog, but her work is starting to get her noticed in all the wrong ways. 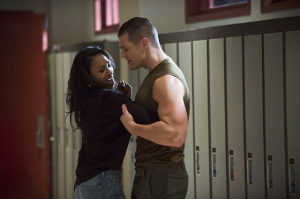 This week’s Flash is all about the characters. Great performances around the board (with the exception of   Barry’s flashback to his days of being bullied) come to be expected with the Flash series, but that doesn’t make them any less noteworthy. Barry, Cisco, Caitlin, Harrison, and Joe all get the gold for most character development, not surprisingly. But what is surprising is that attention is finally being drawn toward Iris and Eddie as individuals and not just their connections to the other characters. Iris having a plotline of her own that doesn’t involve Barry, Joe, or Eddie (not directly, anyway) does wonders for her character’s relevance, and Eddie and Barry bonding helps his character out a significantly. The lack of interaction with any of the main plots or villains has not helped his stock. This episode gives Eddie a bit more screen time to really expand his role. When he first appeared in the pilot, he was revealed as being cocky and just kind of a prat, but over time he’s been shown to be incredibly decent. It’s not accurate for the character (comic book version anyway), but his likability does make his inclusion more natural (why would Iris date a meathead?) Having a bit of an insight in to his past also helps of course, but it’s his interactions with Barry that makes him shine. He’s still got a lot of catching up to do (along with Iris) to maintain the same tier as some of the other players (Joe, Cisco, Caitlin, and Harrison), but he proves his stake in the story by being an unlikely friend to Barry. I’m also enjoying Harrison and Joe’s interactions as the only real adults that are regulars on the show. There’s a clear bond based on their individual experiences that I’m glad is being explored. It adds maturity to the plot.

Of course the plot can 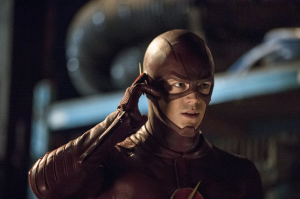 be easily explained, and most of the time is a little uninspired. There are moments when it shows through as being reasonably suited to the situation, but for the most part it’s just a little too reliant on the standard nerd perception of “popularity” after high school. In fact, it’s just a little too gleeful in it’s portrayal of Woodward as the villain. He’s a bad guy in such a cartoony way that it’s just really hard to take him seriously as a villain. Gustin’s mental anguish about his opposition is inspired, and indicative of the turmoil that his character would have in that certain situation, but the bad guy is just so jokingly bad that he almost seems like a parody (more like a proxy punching bag) for jock stereotypes. It’s a dynamic that makes everything sort of bittersweet. It’s well paced, and even the use of science and math to overcome an enemy is even more appropriate than usual, but the main plot is let down significantly by a villain who (though his power is understandably threatening) seems to be trying just a little too hard to be easily hated (never go full Biff).

Regardless, The Flash is Born is a solid entry with a lot of different flavors of side plots that keep the whole story running smoothly. Everyone contributes to the latest episode, making it one of the most evenly matched 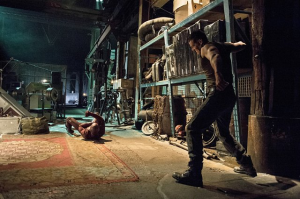 in screentime and plot relevance of all characters since the series started. Also there’s a clever variation on the “One big punch” formula often associated with these type of bully revenge stories (Back to the Future, Friday, Wanted) by using a scientific (well…science fiction) approach to taking down an enemy. It’s incredibly entertaining, and you just can’t deny the satisfaction of watching the little guy get the upper hand. Eddie and Iris finally get a little bit of the limelight, and they prove their worth within the world perfectly. I’m looking forward to seeing them get more to do in future episodes as well. The Flash is growing. The final shot of Iris’ blog represents that idea perfectly. With each passing episode, good or bad, there comes a point at the end where everything crescendos and the show proudly shows no signs of stopping; and your chest fills up and expands and everything is just so powerful. Of course they only do this to make the shock of their real final scene that much more impactful, and it works. God, does it work!