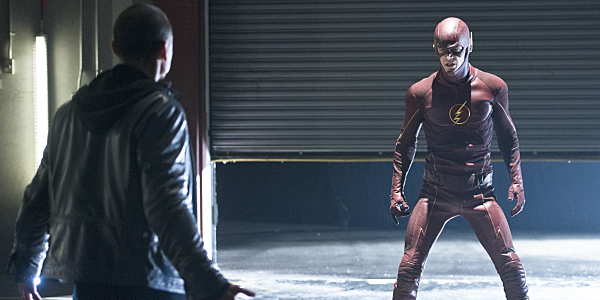 Power loss might be sort of old hat to the comic and superhero community; but this week’s Flash still weaves a complex web of suspense.

Right from the first shot, more is revealed about Harrison Wells than any of the episodes prior. A few of the references may fall on deaf ears for the part of the audience with limited knowledge of the comics, but for the rest of us, his plotline contains within a lot of exciting nods to Flash lore that are nothing short of evocative. Regardless of these Flash fan gumdrops, this week’s episode is all about power, and how it corrupts and 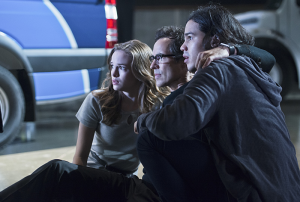 mangles every person it touches. Just kidding…this is the Flash after all, so even when dealing with something so often associated with negative connotations (like power), there still manages to be a positive and proactive tone. Showing Barry using his powers to complete everyday tasks creates a playful and relatable atmosphere that invokes a sense of levity which is a welcome change from the typical obligation associated with stories like this. His arrogance, along with his scientific and mathematically oriented mind is acted out perfectly by Grant Gustin, along with his general sense of fun when it comes to his abilities (the scene with the mugger is a prime example). It’s also successful in building up a convincing sense of tragedy when he loses those powers later in the episode. But it doesn’t deter Barry from fighting to do the right thing. That’s just who the character of Barry is, and regardless of the loss of his powers, Grant Gustin still plays him as morally steadfast with a commanding and inspiring presence. It’s evident in a white knuckle moral standoff between him and his friend and mentor Harrison Wells, when relating to an enemy’s well being.

Power Outage gave The Flash plenty of high points, one of which is with the Flashpoint exclusive villain of Farooq (DC Comics villain Blackout) played by Michael Reventar. Reventar puts a strong foot forward as the series’ most terrifying villain to date, and creates a powerful force in Farooq. Everything from his posture, to his motions, and even his voice exudes pure and uncontrollably savage power. It’s a big step up from Girder (speaking of which, Girder has a decent showing this time around, albeit very short). But this ends up being a 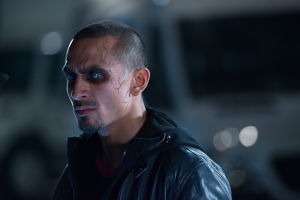 villain Cracker Jack box when Robert Knepper ends up in the Central City after being transferred from Iron Heights in Starling City (Arrow Season 2 Episode 14: Time of Death). Robert Knepper’s portrayal of the Clock King has a much more prominent personality than was seen in Arrow. It’s a totally new thing to deal with when you have the same actor playing the same character in the same universe, but changes in writers and directors end up making the character’s nuances and mannerisms noticeably different. I will say that he still plays the role with the same efficiency (ha!) that we’ve seen in his past roles (especially the villain ones, which is essentially all of them…). There are parts of his character that I think Arrow did better. His use of time to dismantle virtually any system, and plan traps and escapes was better represented by Arrow, but there are parts that The Flash makes more prominent as well. His eccentricities and his intelligence (not genius), and even something as simple as his body language, and appreciation of poetry are all better handled by Flash.

Well whether they’re superpowered or just damn smart, Flash surprises by delivering two solid villains in one episode, and builds an appropriately helpless scenario to build both suspense and danger. The only problem is the sudden shift in to a horror movie atmosphere ironically ended up being the death of that suspense as it gets a little too meta for it’s own good. The actors still play it convincingly, but it’s hard to shake the old cliches (the monster looking for the victim looks in the place that the audience saw them last, but they switched hiding 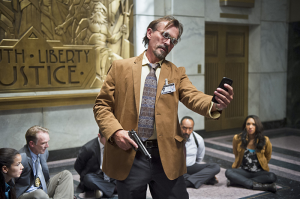 spots without letting the audience know, has that trick ever worked?). Of course it still has all of the best parts of a Flash episode. Joe and Barry’s interactions always make for great television, and Wells and Barry going head to head is nothing short of intense. A lot is revealed about Wells, but it’s buried under a pile of references to Flash lore with keywords and phrases coming up so often that fans will be driving themselves nuts trying to figure out Wells’ arc. And surprise surprise, after giving Eddie a more significant role in the last episode, it looks like it’s Iris’ turn to get her licks in. Candice Patton delivers a convincingly independent turn for Iris that actually builds on her part in the conclusion from the last episode. All in all, a fantastic Flash story from start to finish. Power Outage is a little bit campy at times, but a successful duo of villains and a shift in Barry’s situation changes things up just enough to make it interesting, without going too far and shaking something loose.