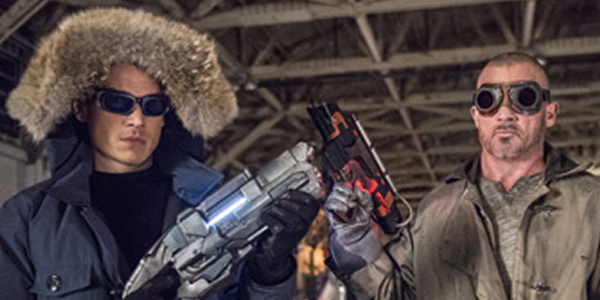 “My names is Barry Allen, and I’m not the fastest man alive.”

The Flash’s universe continues to expand, starting with the highly anticipated mid-season premiere and the first full episode for Dominic Purcell’s Heatwave. Immediately we’re treated to the significant changes in Barry’s

priorities ever since he went head to head with the Reverse Flash, and barely came out alive; so the Flash starts with Barry literally running for his life during some intense training against one of Cisco’s drones. It’s a fantastic reentry in to the Flash’s world with all the trappings of what makes the Flash great. Great effects, great characters, exposition, and more importantly fun dialogue are all things that make the entire show good; but what sets this particular episode apart comes in the form of the big super villain team up between Captain Cold and Heatwave. And in that regard, the two work within the Flash universe like a glove. Wentworth Miller’s comes in strong once again as the infamous Captain Cold. He plays at the personality with a real thoroughness. Everything from his planning to his demeanor projects an aura of dangerous levels of calm (A villain who emphasizes the use of seatbelts in an escape truly seems to have full control of a situation). Of course Dominic Purcell brings the heat as Mick Rory. Though he does have some shaky acting at times (and even a few accent slips), he still acts as the perfect counter, to Snart’s calm, as the hotheaded Heatwave. Their previous work together does wonders for the pair’s chemistry and puts the two founders of the Rogues in a dangerous light to act as ideal villains for the Flash’s return to screens. Beyond that there are some strong moments of Joe’s influence on Barry compared to Well’s, a light commentary against the police department’s distrust of STAR labs, a little more information on Firestorm and Ronnie’s fate, and even an exciting push in to the next appearance of the Rogues. It was definitely a strong episode for fans of Flash outings, both comic and TV show alike.

Final Word: The Revenge of the Rogues brings The Flash running back to screens in an exciting a multilayered premiere that showcases the best the series has to offer. Miller’s Cold proves his mettle once again, and though Purcell’s Heatwave starts out relatively shaky, he ends up embodying the full on passion of his namesake. The two work perfectly with each other as a classic Fire and Ice duo, with all the standard pros and cons that would go along with that kind of team up. More is revealed about the Flash’s world to expand the mythology, but the thing that makes the episode really work is the emotional consistency with the events of the mid-season finale. It’s clearly distracting to think of the danger that the Reverse-Flash presents (for both us and Barry), but the writers build on this empathetic connection to create an exciting outside conflict (the theme of this episode is Priorities). It gets a bit campy in the second act (“We’ll kill this girl!”), but the final act showdown really makes the whole thing worthwhile. Plus a positive ending scene between Joe and Barry (thanks to the fantastic chemistry between Martin and Gustin, respectively) leaves a sweet aftertaste that helps to emphasize the excitement of the Flash’s homecoming.  Welcome back, Barry.