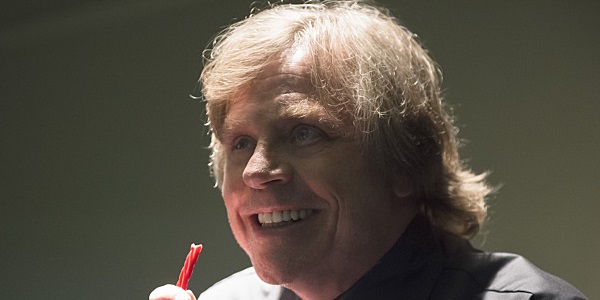 1. Introduce the character of the Trickster
2. Expand on the mystery of Harrison Wells
3. Successfully bridge the gap between the new and old Flash series.

Here are the three secret objectives that you might not be aware of.

1. Create as many parallels between The Trickster and the Joker as possible
2. Reveal everything about Harrison Wells all at once
3. Kick fan’s asses with comic references

You might be wondering if you want your ass kicked by the Flash. The short answer is that you do. You really do.

See, it’s like this. The Flash’s old 1990’s TV show was not what you would call a massive hit back in the day, but it wasn’t without its charms. Case in point, John Wesley Shipp as Barry Allen and a little known hero of the galaxy, named Mark Hamill, as the Trickster. Shipp has been enjoying (and owning) a recurring role as Henry 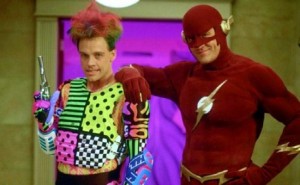 Allen (Barry’s father), and they’ve also brought in Amanda Pays to reprise her role as Tina McGee (albeit having no connection to her original character, apart from the name). But it’s “Tricksters” that brings in the big guns by showcasing Mark Hamill’s return to the role of James Jesse (The Trickster). However, they also utilize his past appearance in the 90’s series through a combination of context, plot, and set dressing to develop an original mythology that fits in to the current series. It’s actually brilliant how they set up the connection, and it works phenomenally through the script to give us a handle on the Trickster’s capabilities without taking up a lot of screen time to establish his character. This leaves plenty of empty run time that’s spent on letting Hamill chew the scenery with spastic mannerisms and pop-culture references. This time is easily the highlight of the entire episode as he rants furiously, in his patented Joker voice, the same sort of insane yet disturbingly relatable dialogue that made his villainous turn such a hit in the first place.

I think a whole paragraph about Mark Hamill is enough, but the truth is that I couldn’t cover all the ground that Tricksters goes over if I had three articles to do it in. It’s an episode of milestones that shakes the series at its 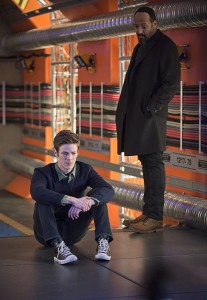 foundations. Comic references abound without mercy, that will be more than compelling to the newcomers, but will have Flash fans practically jumping out of their lightning bolt laden pajamas. Harrison Wells’ true back-story is revealed practically in its entirety, and while I found it elegantly simple and tragic, I could understand how a viewer not familiar with the comics’ mythology would see it as a bit of a cop out to create an easy bake villain. There are still problems though, with Eddie’s revelation getting shoehorned in despite being incredibly significant, and Devon Graye’s Trickster’s plot being weak when forced to stand up against Mark Hamill’s show stealing performance, and a minimally explored investigation subplot from Barry and Joe.

Final Word: None of these problems can hold down Tricksters though. It’s consistently entertaining, appropriately tense, and has plenty of fair nods to the comics that also don’t let down the TV show fans. Mark Hamill kills as the Trickster, though it remains to be seen if he’s a good James Jesse or just an excellent Joker (I’m sorry, but it’s true). Some of Wells’ history is still unclear, but for the most part we know practically everything we need to build a solid picture of him as the villain. Finally (and arguably the most important part) is that time travel is being used in a compelling way that stretches the imagination enough to challenge the mind, but not so far as the turn in to a big ball of… All in all, I’m gonna have to give Tricksters a score of Breaking Bad Season 5.
Even if it’s not perfect, the way it wears its flaws adds to its character.