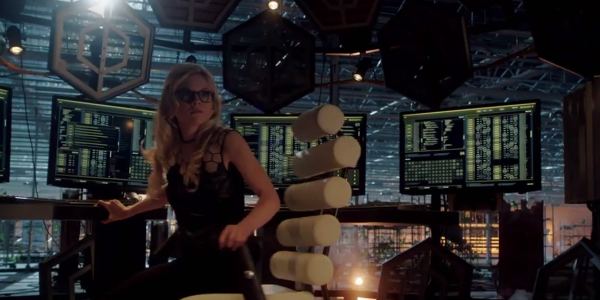 You might be wondering why I’m setting this up with a Monty Python reference.  Allow me to enlighten you.

Alright, now that that little mystery is out of the way let’s examine this week’s Flash with borderline obsessive contemplation.

The basic setup could be described in the same way that you could describe at least 40% of every comic released in the 80’s and 90’s.  A vengeful genius who has been sacked for their extreme methods decides to use those methods in order to exact revenge on the ones responsible for said sacking.  Caught up? Well, there’s a bit of a twist here in that the genius ends up being a robotics expert with a penchant for using mechanized bees to do her bidd

The Bug Eyed Bandit is terrorizing Central City…well more like 3 people *in* Central City, in order to get revenge on her former employer, Tina McGee *le gasp!*.  While the original Bug Eyed Bandit just happened to be a mustachioed C-List villain of the Atom’s from the 60’s (who like most other C-Listers got a rare chance to be cool/threatening in the incredible Blackest Night arc), this particular version ends up being sort of the exact opposite of the comic book counterpart, and while I’m usually the first to harumph at changes from comic to screen, I felt that this one worked out for the better.  Emily Kinney of Walking Dead fame (“BETH!”) dons some com 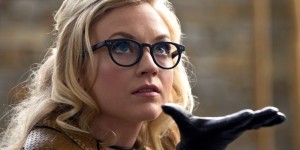 ically oversized glasses to play a standardized villain with a little more spunk than I honestly expected.  Can I just say that the role itself seems pretty hardcore generic in terms of motivation and reaction, and yet Kinney seems to actually be enjoying it!  This commitment makes all the difference as she manages to make glaring at screens, rolling from computer to computer in an office chair, and spouting terroristic threats from under the most miraculous super villainous hair to ever grace the small screen (well…it’s no Connie Briton, but it’s still pretty good) charming (with a side of campy) and fun! Which would be even better if she got to do a damn thing.  Her screen time is criminally minimal considering how well she played at the comic book super villain with real sincerity.

Instead the main chunk of the run-time is dedicated to properly vetting Ray Palmer’s Atom with different scenarios to test his leading man potential, which of course he looks the part, but it remains to be seen if he can carry his own main plot-line.  As a character though, he works as the perfect companion to virtually every character he seems to come in to contact with.  He’s overall very likable and sincere, and seems to be just a little bit too perfect (an ex-boyfriend’s nightmare).  Ray’s scenes with Cisco work phenomenally, which is not surprising considering the characters’ similarities, in type (Cisco also works as a great side due to a general friendliness and likability).  It was also great to see Emily Bett Rickards’ Felicity fit back in to The Flash’s tone easily, as well as create meaningful interactions with the other characters.  There’s a less significant showing from Danielle Panabaker’s Caitlin, but it’s more due to a lack of development on the part of the writing, and less abou 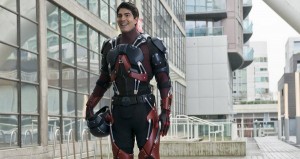 t the actress’ ability.  It’s worth noting how well Grant Gustin’s Barry acts very outwardly about being conflicted.  It notes the character’s penchant for honesty, and discomfort at attempts of subversion.  However it also locks the main character in an emotional corner, disallowing him from straying very far from the stringent plotline that he’s currently focused on.  It’s also worth noting the tangibility of the negative consequences of Barry’s identity being revealed to those close to him, because it can affect relationships.  I’m glad to see Eddie’s character getting some worthwhile drama, and Rick Cosnett makes the conflict convincing, but it also points out the fatal flaw in Iris’ character.  It seems that the only time Iris gets something to do is when it involves a relationship, friendship, or antagonistic connection to a man.  She’s a very antifeminist character, which is especially disturbing when you consider that in the comics Iris is an investigative journalist that is intelligent, cool headed, and independent.  Now I can’t honestly say that I know for a fact that Candice Patton can pull the comic book version of the character off, but considering that she continues to be confirmed as the emotionally compromised girlfriend/love interest without an independent plot-line or motivation of her own, I doubt it’s an issue that’s bound to come up any time soon.

Final Word: All Star Team Up is good, but it ends up being anything but.  Barry and Ray’s big team up amounts to a single moment where they split up to go after bees and a villain.  Emily Kinney turns out a really fun and quirky, if not terribly original, villainous; but just doesn’t get the screen-time necessary to make much of an impact.  Having Cisco start to get suspicious again was a good idea, but it doesn’t change the fact that Caitlin still lacks proper motivation to be anything but skeptical; which could potentially be intriguing later.  Ray’s abilities work 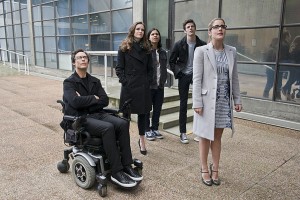 better in the context of Flash than they ever have in Arrow, but the character still has a long way to go.  This episode proved that more than anything, but he definitely has potential.  Barry stays incurably distracted for the entire episode, which doesn’t use the full range of Gustin’s acting abilities, but he still turns out a sound performance.  As usual, Rickards, Panabaker, and Valdes give some solid performances, but Valdes comes out a little ahead due to acting out some visibly revealing anxiety.  There are also some fun pokes to the Atom’s future abilities thanks to some interactions with miniature machines; which would be nice, instead of watching DC Iron Man every week.  All that culminates in a jarring final moment that had me on the edge of my seat.  It was fun being distracted, but I think I’m ready to buckle down and focus on the big bad.  With only 5 episodes to go, the Flash can go in a million different directions.  But as it stands, all roads lead to Wells.