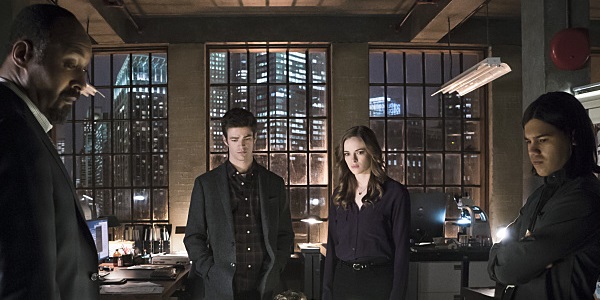 Will the real Barry Allen please…you know what…I’m an ideal combination of too old and too young for this reference.

I’m riding the lightning. To say the Flash has me enthralled would be the understatement of the century. Using a clever mix of grounded filming, ambitious computer and practical effects, and extensive knowledge of comic lore, it’s no surprise that The Flash has already become one of the very best television shows based off a comic book…pretty much ever. “Who is Harrison Wells?” continues to build its compelling and inevitable final battle of The Flash season one, but it does so with an engaging monster of the week, and a boatload of 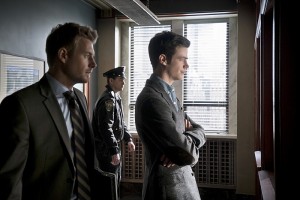 An intriguing dynamic in the conflict sets the parameters for the investigation. The dialogue successfully establishes the rules so we know going in what the stakes of the episode’s mystery will be. This episode also provides us with a rare opportunity to see Barry and Eddie interact extensively, as they focus on a case together without having Joe to act as a buffer. Admittedly, the combination is short lived, but the scenes between the two continue to build on their complex relationship, and it gives Rick Cosnett the chance to deliver lines beyond his usual boyfriend talk, cop talk, and tough talk. I have so much respect for Eddie’s character due to his dedication to the law. It’s his rigidness that makes his morality an outstanding part of his character, which is a department he has been sorely lacking in due to a detrimental amount of development or substantial screen time. I also immediately fell in love with the Lance and West combo. Both are in incredibly similar positions, both are men of high moral fiber, and both are experiencing complications 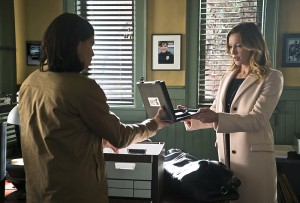 due to the world of tomorrow. It’s refreshing to get the “normal working Joe perspective on events that are beyond the norm. Blackthorne and Martin are incredibly casual and have very natural chemistry.

“Who is Harrison Wells” really takes advantage of the shared universe structure by setting up the building blocks that will be important in each series, (ie: Laurel’s Canary Cry). Each series supplements the other successfully in a way that’s unheard of beyond a few episodes that coincide in Buffy and Angel. Katie Cassidy is slowly forming in to a proper Black Canary as well. I was on the fence, but she’s doing a good job at creating a gradual evolution in to her comic counterpart. Danielle Panabaker also plays a very complex role this time around. She switches between drama to comedy on a dime, and her character’s personality creates all manner of “fish out of water” situations that are always entertaining to watch. But it’s also painful to watch her attempts at salvaging her perception of Harrison Wells despite the mounting evidence. It’s a struggle that is engaging and relatable, as well all want to believe in something contrary to the harshness of reality).

Final Word: “Who is Harrison Wells?” continues the trend of asking just as many questions as it answers. There’s some solid material for Danielle Panabaker and Rick Cosnett as Caitlin and Eddie respectively, but a lot more work is needed to get these two characters caught up with everyone else. Iris also gets a bit of a bone 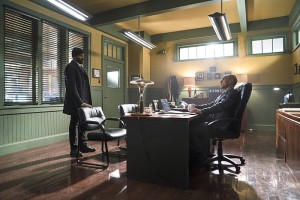 thrown her way as she gets to use those investigative reporter skills (despite her “clue” being sort of unimpressive). Lines drawn in the sand throughout the episode call back to the moral alignments from the comic books (ie: Eobard and Caitlin are both villains in the comics). Everyman makes for a dangerous villain, despite being low key, while the beginning sets up a convincing formula; providing ample suspense without going too far out of the realm of common sense to unbalance the plot. Paul Blackthorne and Katie Cassidy are welcome guest stars that manage to get some mileage for their characters in Arrow without highjacking the plot. Finally, Grant Gustin gets to step out of his character’s comfort zone to play a more douchey Barry Allen with some amusing story effects. An intense ending caps off “Who is Harrison Wells?” as another successful brick in the wall of The Flash VS The Reverse Flash.
Barry’s predicament may be sending him running in the opposite direction; but for us it’s been a good reason to keep running back to our televisions every Tuesday night.