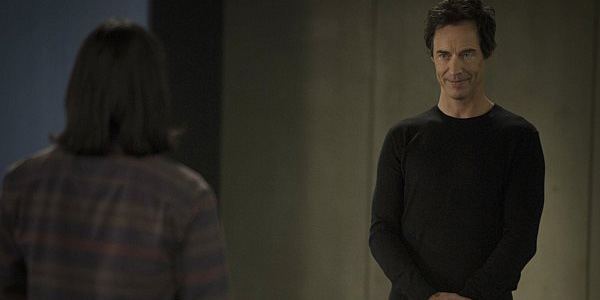 “The Trap” is sprung.

Throughout the course of the season we’ve been subjected to Harrison Wells’ incredibly villainous deeds and misdoings; but, like his alter-ego, there’s a reverse to this as well.  He has also been an invaluable ally to Barry on his hero’s journey (so to speak).  “The Trap” is the first time we’ve gotten an extensive view of Wells’ (or Eobard Thawne’s, rather) personality.  So, why did they choose JD’s big brother from Scrubs, or the guy from the ABC Family movie Snow to play The Flash’s (arguably) most heinous villain?

If I had to choose one word to describe “The Trap”, it would be tense.  Though the rest of the episode maintains the high-standard Flash fare, there are a couple of scenes that really amp up the suspense, serving to use every weapon in their arsenal (music, tone, direction, acting) short of putting a timer right in the corner of the screen.  The tension builds very slowly and painfully to really convey the anxiety that each scene is supposed to get across to the viewer.  The acting in particular puts the whole tone in to the proper perspective, with a special mention for Carlos Valdez’ Cisco for the right amount of desperation during the dream sequence scene.  The same suspense carries over in to the less action oriented scenes as the characters slowly piece together the mystery in a believable way, leaving a few gaps here and there to maintain the illusion of mystery. 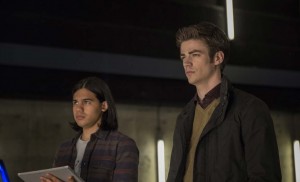 Tom Cavanaugh’s Wells has been a rather complicated character since the very beginning.  Now that things have been simplified, and more information is known than unknown, it’s fair to say that the character has lost a certain mystique.  But there’s also a freedom here that can only be likened to someone finally getting a chance to be themselves after being repressed for so long.  It’s a relief that Cavanaugh really nails, as well as a comic book villain that manages to turn the negative aspects of such a phrase in to positive.  Wells really is a villain, but he has a specific mindset that allows him to be morally bankrupt without turning in to a cartoon character.  Tom Cavanaugh’s delivery allows him to slip in Easter Eggs and subtleties of speech in his lines that allude to his origins and build the antagonistic and underhanded way he interacts with Barry, while at the same time also being a convincing ally (to both the characters and the audience).  But what makes the Trap such a strong episode is Wells’ intelligence.  I’m not saying root for the bad guy, but Cavanaugh’s Wells does make a convincing argument.

Final Word: There’s so much left to say about “The Trap” that needs to be seen and experienced rather than read about.  Iris finally puts forth a proactive effort in the plot, focusing more on her work as a reporter, rather than her status as “prize for the hero”.  It’s small, but we take what we can get.  Having said that, Candice Patton does successfully convey the intelligence and other charming aspects of her character that have been alluded to by all the other characters in the show; the difference being that this time the story and dialogue seems to back her up.  She still needs more, but it’s great to see the character getting a fighting chance to be something besides the damsel.  The knowledge of the future does create a more interesting dynamic between her and Barry, which plays for a little bit for fun than usual.

The highlight though is the teasing of Wells’ and Barry’s finale.  Everyone puts forward their best foot to sell the rivalry, and it’s absolutely spectacular to watch unfold.  As a comic fan, I’ve never been more enamored with a show’s ability to do their characters justice.  Reverse Flash was a hard sell to make threatening in a live-action setting, but this is a choice that has paid off.  Cavanaugh really has this character in the bag, and when you’re doubled over by the gut punch that is the ending of “The Trap”, you’ll have Tom Cavanaugh to thank.