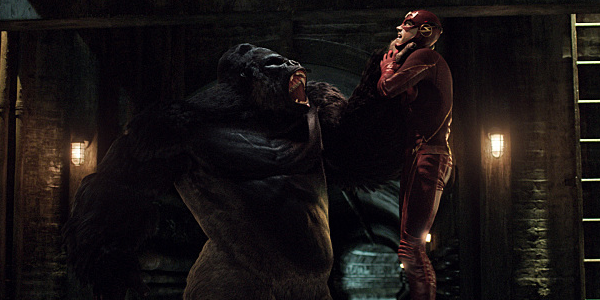 Look out, Flash! It’s a giant gorilla; of course it’s also DC, so this gorilla just happens to be super smart as well. It’s easy to see how a newcomer to the Flashverse would scoff at this particular adversary, but the comic book crowd knows that this is not just any super smart gorilla, this is Gorilla Grodd, a villain tied as 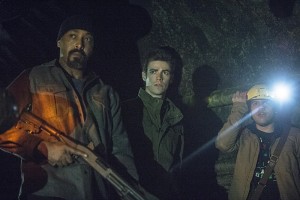 inexplicably the the Flash as Eobard Thawne himself. Grodd has been toe to toe with the Justice League many of times, but he is primarily a Flash villain; so this is a matchup that Flash fans have been waiting for since the not so subtle wink from the pilot. And it is…

Good. Honestly wish I could say more for it. David Sobolov brings Grodd to life effectively, his threat is significant, and he makes it through the entire episode without seeming campy. So much more is going on though, that in many ways, the plot remains permanently sidetracked. Yes it’s good to see Iris bringing a little bit more to the conversation, but this was Grodd! *sigh* The scenes with Grodd are great, but there just aren’t enough of them. The character himself is still evolving however, so the same could be said for his future machinations. I guarantee this isn’t the last time we’ll see Grodd.

The episode delves much deeper in to Iris and Barry’s relationship than any of the episodes prior. I usually can’t help but grimace at “love conquers all” moments, but this episode pulls one off using flashbacks to previous episodes in the series. It’s the most sound evidence of their connection yet, and it’s well conveyed with almost trancelike direction that fits neatly in to the action. What blew me away more than anything about “Grodd Lives” is how profoundly tragic Eddie’s story has become. The scene between h 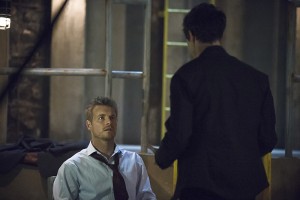 im and Wells is incredibly hard to watch thanks to a perfect reaction from Rick Cosnett’s Eddie at hearing his future. I’m sure that there was a moment in the Flash series that has affected me similarly, but it’s hard to think of one at the time of writing this.

Final Word: “Grodd Lives.” It’s an appropriate title, considering that they successfully brought a giant, telepathic, genius gorilla to life on a primetime TV series. It’s no small feat, and it deserves the praise. The episode acts as a distraction while the season quietly sets up its finale, but there’s some characterization for Eddie and Iris that goes a long way. At this point, I’m convinced that Jesse Martin is the best actor on the show though. The fact that he can display such a wide variety of emotions, and each one seems totally genuine, really adds to the credibility of the series; but it’s the rareness of seeing his character terrified that amps up the unsettling atmosphere of the scene (and he sells the hell out of it!). “Grodd Lives” is a sound installment from The Flash, but a diminished level of giant gorilla and a surplus of angsty will-they-won’t-they does bring it down a bit. Not much, but when you’re promised a big, telepathic, genius gorilla and you end up with two handfuls of feelings, it’s hard to not feel a little cheated.