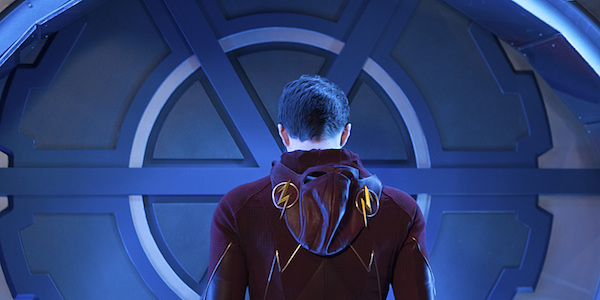 The Flash sticks the landing.

The Flash is brilliant. It’s smart, funny, has strong performances, and pays the same amount of love to its side characters and villains that it does to its titular hero. Whenever someone asks, “How do you make a good superhero show?” I point the The Flash, and I’m pretty certain that I’m not alone. 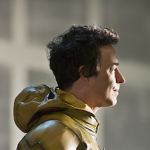 None of this encapsulates how incredibly powerful season one’s finale, “Fast Enough” actually is.

Right from the intense variation of the opening, the tone of conflict between Barry’s two lives becomes central to the story. The ripples of both lives are felt through the entire course of the episode, which is elegant in its simplicity but also emotionally stirring and complex. This is the true triumph of “Fast Enough” as most of the episode is spent talking about the one decision that Barry faces. It’s an unrelenting and ever-present theme that only maintains its gravitas thanks to the incredibly strong performances of the cast members. It is integral to the success of the episode that the actors display the emotional turmoil that the characters face at all times, and this burden is met exceptionally. Grant Gustin maintains a powerful 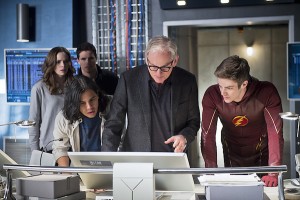 presence and projects the emotion that Barry experiences at every turn, never once failing to convey a myriad of feelings.  Tom Cavanaugh’s Eobard seems even more complex as he feels proud of the man Barry is, but hates who he will eventually become. Jesse Martin really captures the emotion of Joe trying to deal with possibly losing Barry as a son, and being conflicted with the possibility of Barry having a full life with both of his parents. This conflict gains credence due to an incredible scene between John Wesley Shipp’s Henry and Grant Gustin’s Barry that is hard to watch due to both actors’ heartbreaking performances. Victor Garber returns to The Flash as the charismatic Martin Stein, this time playing a major part in the plot, and delivering some moving dialogue.

These are the parts that jumped out at me as a reviewer though. In truth, “Fast Enough” isn’t just a thesis for the first season of the Flash on the CW. It’s a celebration of the past and future legacy of this great character, and the many different characters connected to him. That is the final and greatest element of “Fast Enough”. The future is full of possibilities, and the stories of tomorrow, good or bad, begin today.

Final Word: Everything is so personally focused. There are no tricks, or cutaways, or superfluous characters. Everything about “Fast Enough” is centralized and elegant. It’s emotionally stirring and satisfying for fans of practically any one of the main characters (hell, even Eddie and Iris get a great si 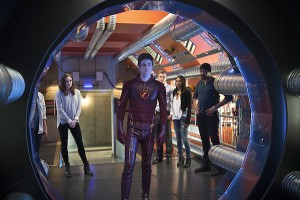 gn off.  Though Caitlin and Ronnie sort of get the short end of that particular stick). Such a vast majority of the episode is concerned with Barry’s monumental choice, so there’s a lot of pressure from the performers to give us some real conflict and emotional turmoil. Without these performances the episode simply would not work. It’s thanks to the actors that the full gravity of Barry’s choice is explored so thoroughly, really creating the right atmosphere for such a simple conflict to be explored succinctly. Even the episode title seems to humanize the superhuman Barry by describing the fear of failure, and setting definitive limits that fully encompass the conflict, so even success carries with it such an overwhelming burden that the cost of the choice is never far from our minds. The tension is the journey, not the destination; but there’s so much anxiety from both that it’s impossible to feel even victory without regret.

There’s still so much more to look forward to from CW’s DC Universe. “Fast Enough” just gives glimpses and hints as to what that means exactly, but it’s enough to start getting excited about it now. We have officially seen the best of the CW’s DC Television universe so far, but with what we’re seeing on the horizon, I wouldn’t be surprised if it comes back this fall even stronger.