Considering that this is an advance review, I’m going to do my best to keep it spoiler-free, so you can watch it yourself on October 6th.  For details on the plot, though, you can check out our “The Man Who Saved Central City” preview here.  Alright, let’s get this started.

Season Two’s premiere really emphasizes the emotion right from it’s opening scene which, with a little misdirection, properly sets the tone.  It also highlights the loneliness Barry (Grant Gustin) feels in his self-imposed exile and sells the duty of the situation, making that exile seem like the most viable option, considering how much he’s lost.  There’s a quiet melancholy that, even without the use of dialogue, instantly enables us to empathize with Barry’s 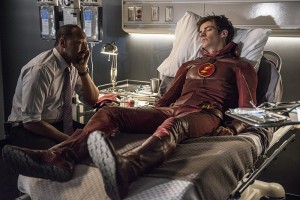 situation.  Despite being one of the most hopeful and optimistic characters of the DC Universe, Gustin still plays at Barry’s sudden distance with real sincerity.

The episode also reveals a dynamic we only saw glimpses of in the first season, with Joe (Jesse Martin) and Cisco (Carlos Valdes) working together as a metahuman task force for the Central City Police Department.  Both characters are extremely likable and act very natural, which means that they have good chemistry immediately.  Besides that, their dialogue helps catch us up on the six months we missed, and what’s happened since then; though at times that exposition can be a bit obvious and heavy-handed.  Iris (Candice Patton) seems to have made a strong comeback after her character’s incredibly damsely debut in season one.  She’s a much more confident and sincere character than before, but she also hints at some deeply buried emotions to keep that transition from being so jarring.  As usual, Caitlin (Danielle Panabaker) doesn’t get enough to do in the plot, but with the pile of Killer Frost hints that have been dropped over the past year by the production team, it wouldn’t surprise me if 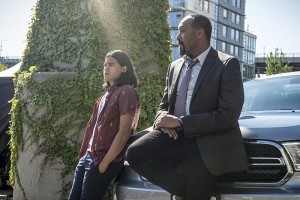 situations like this started to happen less and less frequently as she starts to transition into a much more complex ally.

The big bad of the episode, Al Rothstein (DC Comics’ Atom Smasher played by Adam Copeland aka WWE Superstar, Edge) fits into the Flash surprisingly well.  Fans of his colorful costume will be disappointed by the more realistic armorlike appearance in “The Man Who Saved Central City.”  Despite that, the character’s ability is very CGI heavy which works as both a negative and positive aspect of it.  On the one hand it looks very fake, but on the other it is appropriately conveyed by Copeland in that the size changing aspect of the character is incredibly painful (considering that each time he changes size, Atom Smasher’s bones break and are rebuilt *shudder*).  But due to the nature of the character, there are a lot of questions behind Atom Smasher’s appearance that will probably tie into the season’s main arc.  But until then, the Atom Smasher subplot doesn’t carry as much weight as all the emotion surrounding the characters (especially Barry) in “The Man Who Saved Central City.”

Final Word: All that considered, “The Man Who Saved Central City” is still a strong return for the Flash.  The characters have grown up a bit, but the show has as well.  It knows exactly what it is now, it’s really found its groove, and (if the season one finale was any indication) it looks to be ready to take on even more ambitious 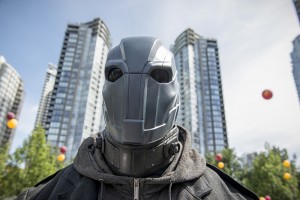 territory in alternate timelines.  Atom Smasher is a decent enough (though uninspired) villain, but it’s the undoubtedly complex reason he’s even shown up in Central City that makes his appearance truly intriguing for the season as a whole.  The very brief look at his origin and the unique cameo at the end of the episode just serves to whet the appetite even more.  Despite that, there’s a lot of emotion flying around that is played with proficiency by Gustin.  The inclusion of the comic book favorite Flash Day really builds up the world of tomorrow that is only glimpsed at in Barry’s look at the future in “Fast Enough.” It’s also just the first step to building the legend of the Flash, one that Gustin’s Barry reacts to with sincere modesty.  There are still more surprises for fans that I haven’t even touched on in this review, but rest assured that Flash fans both new and old will find much to love in “The Man Who Saved Central City.” But you can find all that out and more yourself on October 6th 8 PM/7 Central, only on the CW.