So long, and thanks for all the speed.

Escape from Earth-2 is just that, a race to the breach with all the breachers in tow.  Only one problem: The Flash, aka Barry-1, is Zoom’s prisoner.  With a ticking clock, it really is a race against time back to Earth-1 before Zoom finds and y’know…murders everyone.  The urgency of the episode comes across as being one of the most important elements of “Escape from Earth-2.” While there’s a rush from Wells and 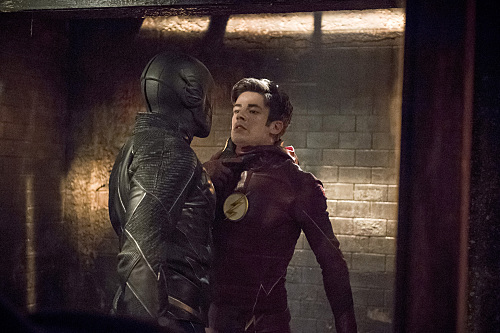 Cisco that translates in to a streamlined version of their usual hack and track style investigation, the most intriguing elements are actually the ones involving The Flash and Jesse.  Barry’s continuous dedication to hope actually finds a powerful outlet as he attempts to revitalize the notion of escape in Jesse’s mind, but the main reason this works is how well conveyed Zoom’s sheer brutality is in the face of this opposition. When at odds with Barry’s defiance, it creates a pitch perfect contrast between the oppression inherent in what is evil and the freedom so highly valued in what is good.  It is the very definition of how much threat hope is to Zoom’s plans, and how quickly he attempts to squash it is very telling of this weakness.  This might just be the first time we’ve seen a crack in Zoom’s armor.

The other important plotline at play in “Escape from Earth-2” is Jay Garrick’s flirtation with possibly returning to being the hero he was.  Despite the proactive things happening for his character, he still comes off as being incredibly tragic.  Regardless, his motivations for the episode are still vitally important to the plot, as they involve both speed and brains, with brains being the bread winner.  Unfortunately, the Geomancer villain is even more one-note than he is in “Welcome to Earth-2” which means that Jay doesn’t exactly get the showdown he deserved, but there’s still a lot 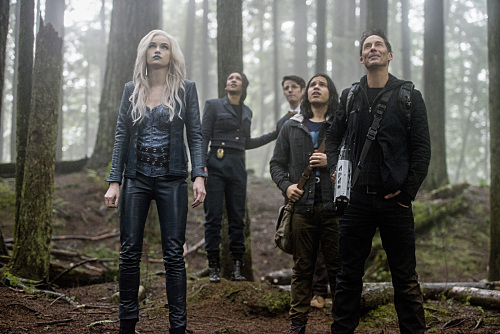 of tension that comes from the Velocity-7 storyline and a crisis involving the breach.  Both of these together ensure that the episode gets the most out of Jay Garrick as a character, which is a nice change, though possibly too little too late.

Final Word: There’s a tease of a new player on Iris’ side of town that promises to make things very difficult for her continued association with The Flash in the coming episodes, but it’s just barely an introduction.  Odds are we’ll see this come to fruition later on.  I’m also incredibly annoyed at the lack of accountability that Barry-1 is held to after he essentially replaced his doppelganger simply to satisfy his curiosity in the last episode.  Still, Gustin and Panabaker shine as their doppelgangers, with a little more subtly coming out of Killer Frost this time around, and a full character transformation that’s actually hard to watch due to the awkwardness that we get from Grant Gustin’s Barry-2.  There’s a lot going on in “Escape from Earth-2” but it’s easy to follow and keep track of and the performances imply deep emotional motivations behind each character’s actions.

“Escape from Earth-2” gets a 8.8/10: An episode that centers around hope brings some life to the fight against Zoom.  Awkwardly sidestepping Barry’s actions of the last episode wastes a significant character arc that could have been explored though.