“Even the Flash can’t outrun the tragedies the universe is gonna keep sending your way.”

Zoom has brought the metapocalypse to Central City, which is really just riots with superpowers.  Despite being the hook, it’s pretty much a footnote of the episode.  The metahumans are all faceless nobodies, their lethality is implied but never evident, and they are all defeated at the 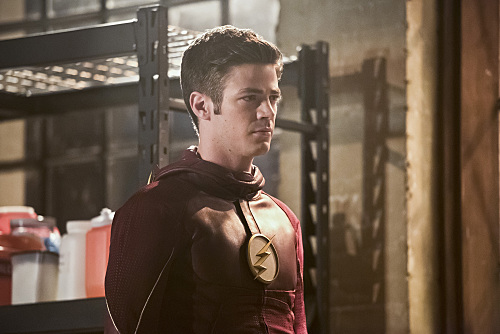 same time.  The solution to the problem of the metahumans in suitably explained and well crafted, but it still doesn’t change that what’s supposed to look like the “Metaocalypse” is more accurately described as the meta fifty percent off sale at Old Navy.  There’s still the villain of the week of course, with Katie Cassidy returning as the Earth 2 equivalent of Black Canary, Black Siren.  Beyond a proper visual representation for the Canary Cry, Black Siren is pretty unremarkable.  Cassidy does a decent job at playing the bad guy, but like Danielle Panabaker’s Killer Frost, the character is flat and forgettable.  Wally on the other hand, got a surge of character development.  It could be argued that he’s just running on the same track that Roy did in Arrow, but Keiynan Lonsdale just comes across as nothing but sincere as Wally.  He’s hard to not root for at this point.

Final Word: Barry’s overconfidence hangs over the episode like a cloud.  It’s interesting to see that confidence alienate his team, rather than rally them.  The end is just too sweet to be genuine; I was just waiting for the other shoe to drop.  Luckily I didn’t have to wait for long.  the ending was shocking, but the expectancy of a shocking ending did diminish it somewhat.  It fits well with Zoom’s Robert Ford level of obsession with drawing parallels between his life and Barry’s.  his origin being a twisted version of Barry’s really pays off with this ending.

“Invincible” gets an 8.5.  Lackluster weekly villains hurt the episode’s proceedings, but Wally’s character development, Barry’s tragedy, and Cisco’s visions all build successfully in to the finale.  Plus Zoom is evil…like VERY evil.