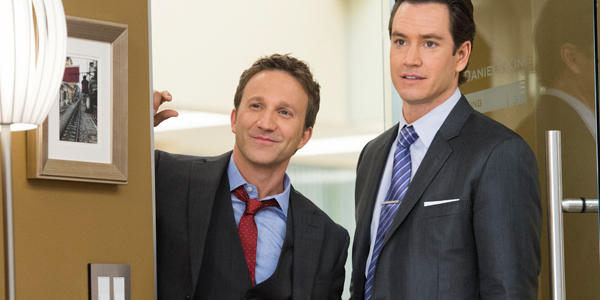 Franklin and Bash is back! Mark-Paul Gosselaar and Brecklin Meyer return as the hilarious lawyer duo in the fourth season’s premier this past Wednesday. It has been a long awaited return, but the firm is not what it used to be.

Infeld has been suspended from practicing law due to his connection to leaking information to Rachael King, and Carp has left to further his career as a senior partner at another firm. This series of events leaves Franklin and Bash in charge, and they are forced to take any case that they can get.

Their newest case they face off against Carp representing an archeologist named Mason Trolley. He claims to have a valuable artifact that he says is a death mask in his storage locker that is being seized by the storage owner. They become unsure about Mason’s claims when they find out that he is actually a telemarketer who failed to even get his doctorate. Again, they struggle to trust their Mason when accusations of insanity are made against him by a rival archaeologist. With Franklin and Bash later discovering that the rival archaeologist is behind the storage owner’s actions of seizing the locker’s contents they decide to take a different approach. They aimed at proving that Mason was insane by using his belief in the curse of Hor-Aha against him. After Mason acted out in fear in the courtroom the case was won by Franklin and Bash. To their surprise Mason was telling the truth from the beginning and he did actually have a death mask of great value in his locker.

With partners leaving left and right Swatello is now a partner at the firm. Franklin sets her up with her case representing a legal weed dispenser named “the Bone”, who is being threatened to close down his shop. The opposing married couple named the Lisks claims to be opening a daycare in their home, which would make the weed dispensary too close in proximity to the daycare that “the Bone” would be shut down by the city. Franklin and Bash’s new investigator, Dan, saves the case when he discovers that the Lisks are rival weed dealers and they are just trying to put “the Bone” out of business. After the case is won by Swatello, both “the Bone” and the Lisks decided to go into business together. Swatellow finds them all smoking in the conference room with Peter and Jared and then she reminds them that they have an interview with a prospective partner. Peter and Jared who are stoned beyond belief must “maintain” and convince Anita Haskins to join the firm. Luckily for Anita the firm is falling apart so there is room for her to work directly on cases, which is an opportunity she wouldn’t receive at other firms. She is eager to join the firm and I am eager to see her appear in next weeks episode and see how she fits in at the firm.