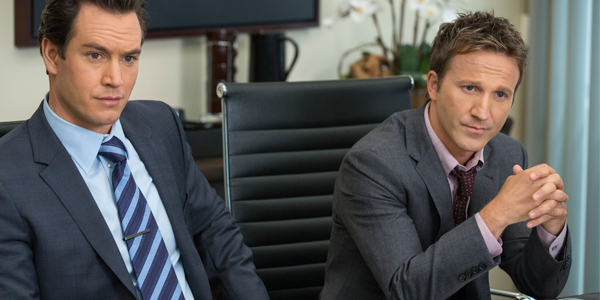 We are back for yet again another great episode of Franklin and Bash. They guys struggle to keep control of the firm as they try to earn the month’s rent before they are evicted.

Franklin and Bash awake in the morning to find Infeld doing yoga in the nude, and he explains that he will have to stay with them until he can get his law license back. Peter and Jared agree that it is a major priority to get Infeld out of the house, but they have bigger problems to deal with this week. They are short on the firm’s rent, and have to find a way out or they end up killing the firm.

The boys turn their attention to a new divorce case to bring in money and maybe get a date. Their new client tells Peter and Jared that her husband is very wealthy and that she signed a prenuptial agreement when they married. Her husband has been faithful, so the prenup states that she leaves the marriage with exactly what she came in with, which is nothing. This may have seemed like a simple divorce case, but when is anything easy with Franklin and Bash. As they send her off to get ready, they bump into their sub-tenant and plastic surgeon, Dr. Beckmann’s, only to find out it is his wife.

Money has been tight since they lost Infeld, so they have been struggling to pay rent. With Dr. Beckmann paying Franklin and Bash rent they don’t want to upset him by representing her in his divorce, so they promise to put in a good word to his wife if he pays them the rent. When the guys try to convince Chelsea to get back together with Beckmann she immediately doesn’t go for it. Peter and Jared are now convinced that they will need to defend Chelsea straight-up. Franklin and Bash aim to take the defense strategy of duress, but when it is brought up that she consulted with counsel it destroys their case. Now Peter and Jared only have a day to come up with a new approach. When their investigator, Dan, finds a picture of Dr. Beckmann in Paris ten years ago with a girl that looks exactly like Chelsea, she denies that it is her. Chelsea notices that Dr. Beckmann has been trying to turn her into an ex-girlfriend with all of these surgeries. With this they believe that they have found their new angle for the case. They now are trying to claim that he cheated on Chelsea with herself. They take this to the judge, but without proof the judge cannot allow the picture as admissible. Franklin and Bash try to get Beckmann to bring the picture into the courtroom by pulling facial features from a box portraying his opinion of true beauty. With the odds of Beckmann recreating the picture at 1,048,000 to 1 the judge allows the picture as admissible. With that the guys win the case and the prenuptial agreement goes away.

Even with Dr. Beckmann paying rent to Franklin and Bash they are still running short on money, so they make a deal with the property manager to extend the grace period on their rent. They promised him Dodger tickets behind home plate, but unfortunately Carp has the tickets. Now they must reason with Carp to get the tickets back. Carps conditions are that Franklin and Bash get him into a restaurant, which has a six month waiting list. Peter and Jared are absolutely desperate to the point that they actually kiss each other attempting to get the reservation. But even that doesn’t get them the reservation because of the restaurant’s seat capacity. Peter and Jared’s friend at the fire marshal’s department tries to get the restaurant another two seats in return for legal help. They send Anita to represent their friend at the wildlife park where he rolled through two stop signs. Anita threatens to bury them all in paperwork, and gives them a business card with her old firm, which causes them to drop all charges. So, their friend gets the restaurant shut down for three weeks, but they do get the increased capacity. They go to the chef and offer him their beach house for a private dinner for Carp and his client. With Carp’s dinner set he gives them the tickets, giving them an extra week to pay their rent. Did you follow all that? It was dizzying to watch them spin one deal into another, and if last week’s episode, with all the cast exits, worried you this one proves the boy are back for another fun season.

Th final hurtle they have to cross is getting Infeld back into the firm, and in true F&B style they find a way to get him reinstated. They choose to tell the BAR that he is a sex addict, which is not too far off from the truth, and will protect Carp from admitting to what he did with Rachel. They are claimed his sex addiction has clouded his judgement, allowing Rachel to steal his passwords and flee the country. The guys found 641 witnesses to Infeld’s sex addiction, and after some testimony the state BAR agreed to reinstate his license.

It was a crazy episode where Peter and Jared went to all lengths to keep the firm for just another week, but now with Stanton back they can start to turn things around. I can’t wait to see how Stanton coming back will affect the firm and to see whether Peter and Jared will survive another month with Infeld.