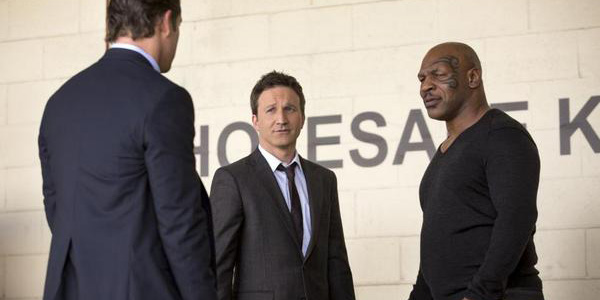 Infeld is back at the firm and he’s not happy with the way that Peter and Jared have been running things.

With Infeld back, he wants to talk to the guys about how they have been running things around the firm. He tells them that pizza parties and football in the office is not the way to run a respectable firm. They all go out to lunch at a local restaurant to talk about the firm’s future. With all that has happened to Stanton recently his reputation has been tarnished. He usually receives the best table at this restaurant, but today they put him by the bathrooms. He also notices that his caricature has been taken down from the wall. All this is very upsetting, and on top of that the owner of the restaurant tells Stanton to get the hint and leave, so Stanton punches him in the face. Any bad press is going to affect Infeld’s return with the BAR, so Peter and Jared convince Infeld to mend fences with the owner. They eventually come up with a contract that all this will be settled with Infeld taking one punch as settlement for his punch. The contract is signed by all parties, but there is a substitute puncher clause so Mike Tyson comes out and punches Stanton Infeld in the gut.

Franklin and Bash’s newest case is a walk in client named Jimmy who is being charged for the theft of celebrity handbags. Jimmy is a taxi driver for an app, and his passenger for the night has framed him for the theft of valuable celebrity handbags. Poor Jimmy is a nice guy, and didn’t see it, but she had been stealing the handbags from each event he drove her to. Peter and Jared felt that they owed him one when Jimmy told them that they used the app to get a ride home and both threw up in his backseat… Now with Franklin and Bash on the case they will have to find someway to track down the woman passenger and have her admit that Jimmy isn’t involved. They found her, but this isn’t exactly how they wanted it to go down. She plead guilty and now she can testify against Jimmy saying that he was the one behind it all. The guys need a new strategy. They try to prove that Jimmy was on “drugs” that night, and that is why he ended up turned around and so disorientated. In court they use the device from Swatello’s drug case to test whether Jimmy’s pupils indicated that he was under the influence. He tested negative for drug influence, but when they called Sadie, the female passenger, into the room they re-tested him for influence of drugs and he came up with high levels. Just with Sadie’s presence in the room had changed Jimmy’s reading on the machine. All of the charges against Jimmy were dropped because he was lost in love and under her influence.

Swatello gets stuck with the dud case that nobody else wanted. Peter and Jared come to her office and tell her a story about it being the best case for her as a lawyer, but actually nobody else wanted the case. Jared and Swatello still have this awkward love connection going on, so when Jared sees that the new client Bob is very attractive he gets very jealous. It only gets worse when Bob’s case turns into a huge lawsuit against the drug company Twilera. The company is accused of long lasting sleeping pills that make users act in wild and outrageous ways. All the firms in the city are now after Bob as a client, so Jared has to tell Swatello to wine and dine Bob, which only makes him more jealous. Dan now begins investigating Bob for Jared, and he eventually finds evidence that Bob and his physician have been filing false cases for a while now. Swatello finds out through her own investigations, which lets her know Jared sent Dan to spy into her during the case.

Best show moment: When Mike Tyson first came out Peter and Jared were so excited to meet him that they completely forgot that he was there to punch Infeld. Jared even did his impression of Mike, but then Mike Tyson all of a sudden punched Stanton in the stomach. Quickly in response to Stanton getting punched Jared took a swing Tyson and hit him in the face! Mike Tyson walked off and yelled back, “I don’t need this. I do theater now!”