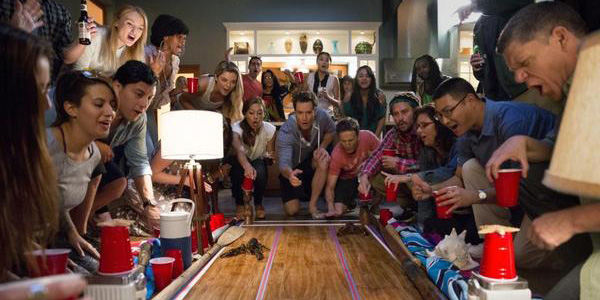 Franklin and Bash take on a long shot of a case while Infeld tries to build the firm up again by pulling in some big clients.

Franklin and Bash’s newest case is representing a man who is losing his property after a rich media guy took it over while he was away in Costa Rica. Their client, Dewey has come back after five years to find that Harcourt, the media mogul, has claimed the land as his own. If Franklin and Bash cannot prove that Dewey objected to Harcourt taking his land at any point then Harcourt will legally acquire the property. The guys try to get a ticket for trespassing so that they can take this matter to criminal court. The officer who wrote them the tickets for trespassing is making their job very difficult by writing them additional tickets, and even getting them arrested for racing lobsters. After their arrest Peter and Jared decided to take a different approach. They discovered that the police officer who wrote them the ticket had been in Harcourt’s pocket for years keeping people off his property. In court they were able to prove this, meaning that Harcourt kept people off of his property illegally, so Dewey gets his land back.

Damien found out that Infeld covered for him regarding the Rachel King investigation, and he feels embarrassed that Infeld had to cover for him. He confronts Infeld and tells him that he is a successful lawyer and that he doesn’t need any help from his uncle. Infeld is trying to land a whale of a client to try and get the firm back on track, and as he leaves the meeting he see’s Carp coming in for the next one. Carp tells him how he is going to prove that he is a good lawyer by stealing the whale from Stanton. Infeld has had it. He isn’t protecting Carp anymore. In Stanton’s next meeting with the whale he tells him all about Carps masturbation tape and how he got off on killing a judge, but somehow all this “variety in character” is appealing to the whale. The whale offers Carp the job of his personal lawyer, telling him that Stanton talked to him about it. Damien is furious that Stanton intervened yet again so he turns down the job. When he goes to talk to Infeld he finds out all the negative things that Stanton told the client and how he still wanted to have Carp as his lawyer. But after Carp turned him down the whale signed with Infeld, so Carp screwed himself.

Peter gets tasered by his cop ex-girlfriend. Wendy helped them record Harcourt offering money to a cop when she fake arrested Franklin and Bash for trespassing, but in order to sell it she tasered Peter in the butt. After they won Dewey’s case they had a celebration party where the entertainment was the dashboard cam of Peter getting tasered. Mike Tyson punching Infeld and Bash getting tasered…What will they have for us next week?