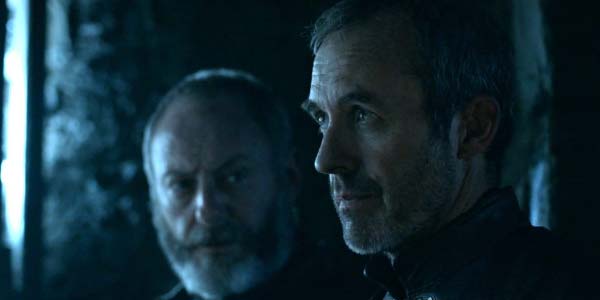 What should we be more excited about this season– more scenes with Jon Snow’s face, dragons(!), or Stannis Baratheon joining the grammar police? Read why Stannis is becoming the coolest cat around.

Up until last night’s episode, I could not stand Stannis Baratheon. I just always considered him a sniveling puppy, lapping at the heels of his mistress, begging for scraps of her affection. I am not sure if it’s my love for sentimental moments, or proper grammar, but these last couple of episodes have my loyalties shifting. First it was the touching scene he had with his daughter, which showed his ability to be a kind, feeling man despite his stone cold persona that I’ve grown to dislike over the seasons. But now that he’s sharing his toys nicely with Jon Snow, and spreading English lessons throughout the realm, I almost forgive him for torching my boy, Mance Rayder. I am not sure if it’s Melisandre’s guidance that has made Stannis finally such a strong character, or her lack of attention that’s making him think clearly, but I am finally seeing Stannis as an actual potential ruler. He’s displayed kindness, yet sterness, this season, and I have a soft spot in my heart for lovers of correct grammar usage.

I have always been a supporter of Khaleesi; her depiction of such a strong female character despite limiting circumstances since the very beginning has made her a role model. However, she had been losing her touch for captivating my attention. Instead of seeing her as strong, I began to see her as stubborn. It seemed that because she was grasping so hard to have her own way, and failing to rein in the people, she began to doubt her own abilities. This in turn has been shifting her from a woman of confidence to someone who needs everyone’s approval. “Kill The Boy” has once again instilled within me the passion I had for this character; she did not ask for permission, she sought what she wanted and took it. And it wasn’t in a terrible, selfish way that she did it either… Khaleesi always had the grace to make her decisions seem completely logical and right. Plus, I am happy to see the dragons having a more pivotal role in the series, rather than being chained up in the dark.

This week’s episode was not action packed, which I think people tend to confuse with boring. I somewhat prefer episodes that change my mind, rather than make it race, because then I am itching to see what that specific character has planned for the next episode. I am incredibly intrigued by Stannis now, which has been a complete shift from the eye rolling numbness I felt during his previous scenes. What I think this season is doing so extremely well is taking characters that were somewhat in the background, and bringing them forward. Granted, they have always been main characters. However, characters like Jon Snow and Sansa were never as pivotal as they seem to be becoming. It should be interesting to witness the unveiling of the underdogs, but knowing George R. R. Martin, he’ll have them fall as well, since we’ll be rooting for them the entire time.