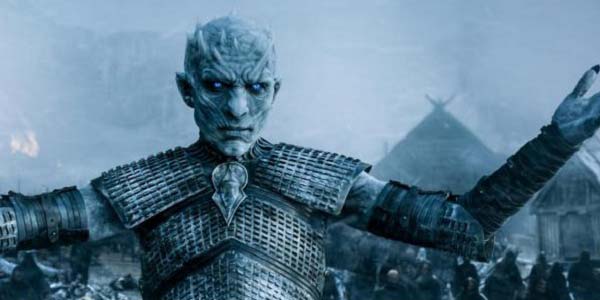 Previously on The Walking Dead.. err, I mean Game of Thrones.. But seriously, this week’s episode was like a crossover episode, and I am not exactly sure how I feel about this.

Jon Snow is at the center of everything in “Hardhome,” becoming more of a prominent character and taking the reigns to ensure survival. He, his fabulous curly mane (not unlike Rick’s), his accent (Rick again), and his weapon of choice all band together to get some of the Wildlings to actually heed his warnings and help fight—until the almost comical looking skeletons foil their plans, and Jon ends up covered in blood because he has to take care of business once again, and wait, am I talking about Rick again or Jon, because they both seem to always be covered in blood at some point?  In a zombie obsessed culture, this seems like just another tactic to satiate this generation’s need for mindless creatures snarling and snapping their jaws at supple flesh. The reason I think that it actually works this time as a unique experience is because of the lack of an apocalypse.

Well, a literal apocalypse– one might split hairs over the fact that because every race, and House is waging war on one another, when it’s over there might be only one nation left standing, ushering in an end of days. But for now, everyone is alive (sort of) and well enough to be wielding swords every which way. Everything that we’ve seen in the movies depicting zombies has been centered around an apocalypse, where you’re faced with the question of morality and whether humans are more dangerous than the supposed monsters they’re trying to survive from. However, Game of Thrones is throwing Undead into a medieval, fantasy world and what we’re left with is nothing short of amazing, nonstop action. The only question I am left with is what is UP with Jon Snow’s sword? Look, Jon can’t have the best hair AND the best weapon in the world, that’s just completely unfair to everyone else fighting for the throne.

Speaking of unfair, let’s have a moment of silence for Jorah Mormont’s ever deflating heart. Good now? Here’s why I at first wasn’t completely crushed by Khaleesi’s decision to have him removed. He traveled all that way, doing whatever it took to get back to her, just to have her send him away. My feels were tingling at this, but here’s the thing: it was almost as if she forgave him by letting him live, and he knew he was going to die anyway because of the grey scale, and having her forgiveness was better than nothing, right? Except Jorah goes and ruins my theory by coming back, YET AGAIN. You have to give him credit, he does not give up. I can’t help but wonder if he actually thinks she’s the best fit for the throne, or if he’s just in love with her. Let’s not forget how this show depicts people in love… It never ends well (R.I.P. Ygritte).

Finally, something I especially liked and loathed about this episode was their depiction of the softer side of the Wildlings. Okay, I may be the only one, but I totally forgot that in order to have adult Wildlings, you at one point have to have baby Wildlings. This culture of people have actual children that they love, shown by the Wildling woman Karsi, who puts her children on the boat with such love and affection that I was stunned.

Here I thought Wildlings just sprouted from the ground, but they have actual families that they care about. I liked that the episode was showing the softer side of the “Wild”lings, but I loathed it because of the outcome of the character of Karsi. This episode also shows the importance of understanding that there’s a bigger problem than the Iron Throne, and people are so ravaged by their hunger for power, they neglect to notice the dangers affecting each and every one of them. White walkers are like zombie cards in Magic where you get a +1 token for every additional zombie you have on the field (okay, it’s been about 5 years since I’ve played Magic, I can’t even promise that’s an accurate statement) and pretty soon you’re engulfing your opponent in zombies, and then they become a zombie and make zombie babies, and okay, I’ll stop now. Basically, they’re becoming unstoppable. The Undead are a new breed of danger threatening Westeros, and I’m frightened for this make believe, non existent land that didn’t exist long before my time. And I’m loving every nail biting second of it.