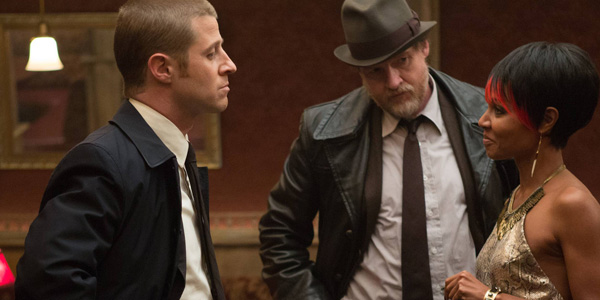 Kids are missing in Gotham and it is up to Gordon and Bullock to find out who is behind the kidnapping.

First off it is hard not to notice that Gotham is struggling to be two shows at once. You can feel the camp that was part of the Burton/Schumacher films, but it is trying to be a crime drama. The music and the stylized villains in this series so far may be the downfall of the show, making those campy moments so much more obvious. The strength is the crime angle, more serious dialogue between Gordon and Bullock would save the show, but they are also stuck in the campy side of the show. McKenzie and Logue try their best, but the surroundings hurt them, and Logue’s dialogue is over the top coming off flat. Finally the episode is called Selina Kyle, but it takes about 40 mins before we see anything other than a quick shot of her around town.

The case this week has to do with the Dollmaker. He is using a duo to round up kids for his own needs, but those needs are hidden from the viewers. We never find out what he needed the kids for, and without knowing him from the comics, it leaves the audience in the dark. The show jumps between Gordon, Kyle, and Cobblepot; showing where each ended up after the pilot. Cobblepot is not outside of of Gotham, on a murderous rampage, looking for a way back. He is starting too look more like the Penguin every episode, but the twisted version, not the comic look. Gordon crosses paths with Kyle during the investigation of the missing kids, and in the end finding out she is a witness to the Wayne murder.

The show is trying too hard to do too much, and considering the examples it has are not helping. Arrow had the ability to take it’s time and build a world, but it is clear that this show is in a race. Batman is by far my favorite superhero, and I like the idea of a Gotham before him, but when you have to live up to the mantle of the Bat and Arrow this show may crack under the pressure.