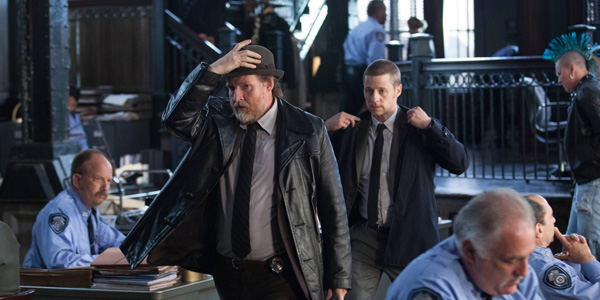 There is a vigilante in Gotham, and it is up to Gordon to track him down.

Another week in the dark city of Gotham and things are finally starting to look better. This week’s show focused mostly on Gordon and his struggle in Gotham to stay clean. Some of his past actions are coming back to haunt him, but since he did not really do what he is being accused of he is clean.

This week the wrong doers in Gotham are being taken out by a vigilante named the Balloonman. He is tracking down those who he thinks have done wrong, and attaching them to balloons, sending them high into the sky, until the victim plummets to their deaths. The show shines with Gordon’s struggle, Mckenzie does a great job this week trying to maneuver through all the crooked cops and politicians. The police work save the show this week, because the camp from the rest of the cast is just getting worse. We also get a little more insight into Barbara and Montoya’s past, giving more depth the the future Mrs. Gordon.

Jada Pinkett’s Fish Mooney is now directly channeling Eartha Kitt, making he feel more Catwoman than a gangster. Her lines feel forced and over the top for no reason at all. Meanwhile we get to watch Cobblepot come back to Gotham. The story line for him is interesting, but once again the dialogue misses the mark. When I think of who the Penguin was as a young man, I don’t see the person they are building up in the show. He should not be the ruthless mobster he will grow into, but he seems much wimpier than he should be at this point.

The show is getting better, but it has a long way to go.