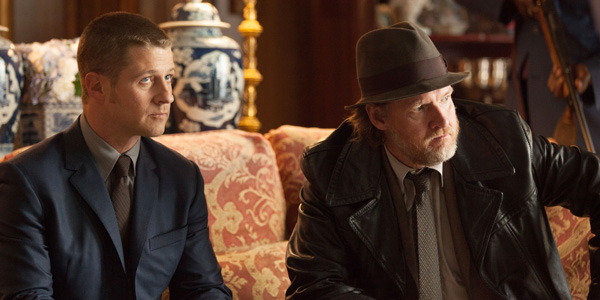 With each passing week Gotham improves, bringing in less camp and more drama. This week the Penguin’s plan is finally revealed, showing he is going to be the mobster we all know when he grows up. The first few weeks made him seem like a crazy and bumbling lackey, but now we see him for the mastermind he truly is in the messy world of Gotham.

It turns out it was his plan all along to stay alive, picking Gordon as his killer, working his way into the Maroni family, and revealing himself to the world as still alive. He is playing both sides against each other and with each skirmish he moves closer to becoming the boss himself.

The bosses of Gotham have no clue how much they are being manipulated by Cobblepot, they think they are still in control an it seems Fish is the only one that can see the plan. Caught in the middle of all of this is Gordon, who almost loses his life this week. Cobblepot reveals himself to the world, showing that Gordon did not follow Falcone’s orders, putting a price on his head. After a few attempts to bring Gordon in peacefully, Falcone sends in Victor Zsasz, introducing him to the views early in his killing career.

Gordon almost loses his life at the hands of Zsasz, but is able to escape with the help of Allen and Montoya. Gordon finally has some friends on the force, and the Cobblepot is rising in the mob ranks. The show is really shaping up, and might turn out to be one of the great comic based shows.