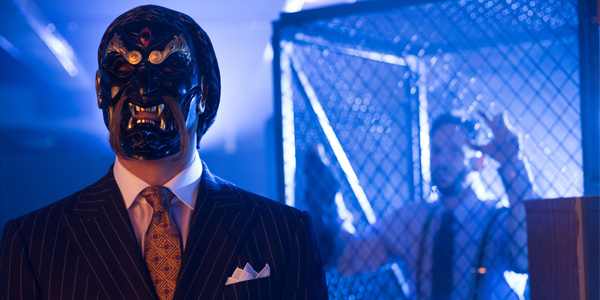 Another Bat-villain arrives with a new origin on Gotham.

It has been interesting seeing the origins of the villains in the world of Gotham. Some come off as too campy, some hit the mark, and this week they hit the mark with Black Mask. Not yet the mob boss of Gotham, Roman Sionis is running his own fight club. Gordon and Bullock are on on the case, looking into a murder and beating. They need some help from Nygma, who gets creepier every week, to find out the location of the murder and to connect the dots between previous unconnected murders. Gordon and Bullock are starting to become real partners and starting to turn the corrupt squad room around. The use of the fight club to introduce Sionis was a good move, showing his ruthless nature and his leadership.

While Gordon is working to track a killer Bruce is letting his dark side out a little this week. While in school he is picked on by a group of boy lead by Tommy Elliot. The future Hush seems to be the bully of the school, pushing the young Wayne’s buttons. Bruce goes to Alfred for advice, and the new father takes him right to the Elliot home to stand up to Tommy. Bruce confronts Tommy beating him bloody on his own front door. After the confrontation Bruce realizes he enjoys it and asks Alfred for some fight lessons.

It seems like our boy scout is turning the minds of the police while Bruce is turning toward the dark side of his mind. Gotham keeps getting better with each passing week.