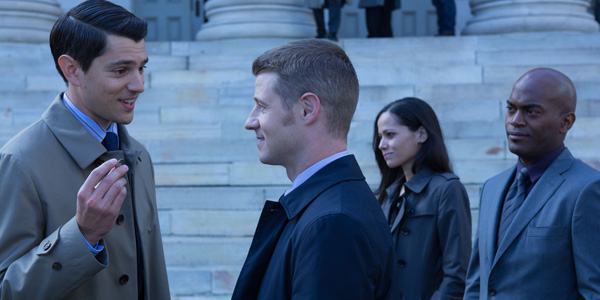 This week’s Gotham introduced the most famous attorney in Gotham City and saw the first meeting of the Cat and Bat.

Gotham continues to grow it’s cast of rogues for the future Dark Knight. This week Harvey Dent was brought in to help Gordon find the Wayne killers. Dent’s plan is to use Selina as bait to shake up the underworld, and flush out the real killer. Gordon has concerns for her safety, but Dent wants to take the mob down no matter what.

This Dent is unlike other live action versions and feels much more like the Batman: The Animated Series version. A man with a dark side, that comes out when he is pushed. With all the nods to older Batman incarnations, this is one that seems to fit the show. Once again though it seems rushed, the other side of Dent did not have to come out 30 minutes into his first episode. While the plan is put in action Selina is left at Wayne Manor for her safety, even though Alfred thinks it’s a bad idea, but by the end of the hour he changes his mind. She is able to bring out the innocence in Bruce, giving him something else to think about in this terrible time. Alfred fights back against her the whole episode until the final moments when he see the two having a food fight, and Bruce smiling.

Finally the case of the week has Gordon and Bullock chasing down an escaped bomb maker, Ian Hargrove. The escapee however is an unwilling participant in the Falcone/Fish feud, forced to kill by the Russians. He is able to get a message out to Gordon and the cop with one of his bombs, and sparks the need in Gotham for mental health. Gordon argues and blames the Mayor for all the insane in Blackgate not getting the help they need. And by the end of the hour Arkham is open for business.