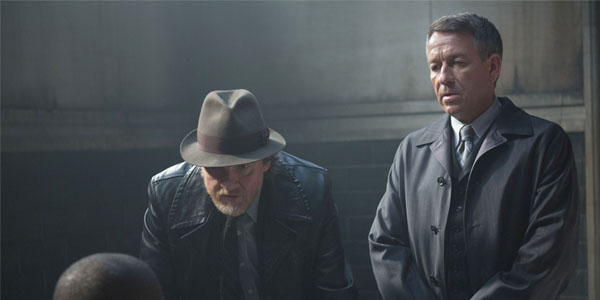 Gotham’s mid-season finale took Bruce through Gotham with Selina and Gordon got a new assignment.

The hour starts off with Selina on the run, thanks to leaked information from Dent. It’s unclear who hired a team of assassins but they are after both Selina and Lovecraft. Gordon arrives at Wayne Manor with Bullock in tow, revealing his continuing investigation into the Wayne murders. The pair spilt up to track down Selina and Lovecraft, with Gordon going it alone and Bullock teaming up with Alfred.

Dent’s theory on Lovecraft is ruined when Gordon finds the crooked business man, and Lovecraft reveals that he may have profited from the Wayne’s death but was not behind it. The assassins find the pair, leaving Gordon alive and using his gun to kill Lovecraft. Bullock had a little more luck tracking down Bruce and Selina with Alfred. They were able to stop the killers, and save the day. In the end Gordon is reassigned to Arkham as a security guard, leaving a changed Bullock alone in the GCPD.

The real highlight of the hour was the Bruce and Selina team up. The duo have been by far the best part of the series, and they took the spotlight this week. The future relationship is hinted at as Bruce spends the hour chasing after the future Catwoman. Alfred also got to shine taking on a team of assassins and taking out a few on his own. This new Alfred is a breath of fresh air, showing more than the old man caring for the boy. You can see this Alfred has much more to offer than advice and food. This week after taking down the assassins at the house and taking a bullet, he joined Bullock to interrogate a witness, stand toe to toe with Butch, and go into a building of assassins to get Bruce back.

I know Gordon is supposed to be the focus of the show, but in the second half of the season I hope there is more Alfred!

And check out the promo for the upcoming episodes in January.