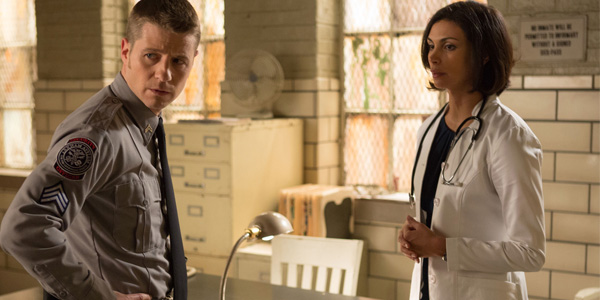 There is a new status quo in Gotham and a new face that comic fans will recognize.

The inmates are running the asylum in Gotham. This week’s show opens with Gordon in his new role of guard at Arkham, watching a play being put on by the inmates. The scene is reminiscent of judge Joker on the animated series, giving clues to who will be the big bad in the episode. The inmates are being tortured, or controlled by someone at the asylum.

Gordon’s detective side comes out, even though his new clueless boss blocks him at every turn. While looking into the attacks, Gordon meets the prison doctor, Leslie Thompkins. In the comics Thompkins is the woman who helped Bruce after his parents death, and after when crime fighting took a toll on his body. In the show she is every bit as tough and capable as her comic counterpart. As the episode moves on and Gordon eliminates suspects, we find out the a rush to open Arkham gave the inmates the upper hand, creating an environment of chaos. Gordon finds out one of the nurses is actually an inmate who was hiding in the basement when the place reopened, but she was not the puppet master, the judge from the start of the show, Grubber, was actually pulling all the strings. He was using shock therapy to control people, mixing the crazy of the Joker with the control of Hugo Strange.

Meanwhile in other parts of Gotham, Fish and Penguin are making plays to take over the mob, but both are met with resistance. They are both forced to see the limitation to their place, having to readjust their end games for the time being.

The past few weeks of the show have created some criminals, but after this week we may have our first real rogue. Is it too soon to create them or is it just right?