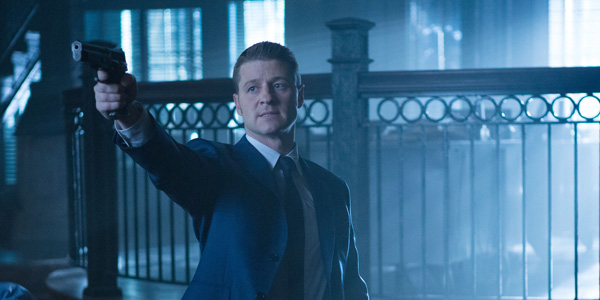 Gotham returns again, with a real gimmick villain and some mob drama.

The show focused this week on Gordon and Falcone, with both rising from the ashes of the last few weeks. Last we saw our hero, Gordon was stuck at Arkham but this week he bluffed his way back to detective. Gordon told the Commissioner that he could catch Gruber, now called the Electrocutioner, but he only has 24 hours or he and Bullock are on guard duty for life. Gruber made his way through Gotham, leaving bodies in his wake, and in the end he was taken down by rubber boots and a cup of water. A quick end to a very promising villain, which is a shame considering how good the last episode was. The shake up of the status quo made the show a little more fun, but after the capture its back to the norm.

The real through line in the show is the drama of the crime families. Fish is finally ready to put her plan into action, taking back her girl and sending Falcone into a tail spin. The leader of the city doubts his ability to lead and considers leaving the town all together. Cobblepot comes in just in time to let Falcone in on Fish’s plan, reenergizing his tough side, turning her plan back on her. The show ends with Fish and Butch held captive waiting for their deaths, while Falcone is back in charge.

Nigma had a few good moments, hinting toward his future, and Gordon and Thompson get a little bit closer. The show is trying to be timeless, using overheads in the squad room and the cars in the show, but it still feels too new. There is something missing in the show, and I’m not sure if it is geek fatigue or that compared to Arrow and the Flash the show falls short.

It’s Batman’s world so I’m invested, but the weekly wait is making it harder to keep coming back. This might’ve been better as a Netflix binge show.