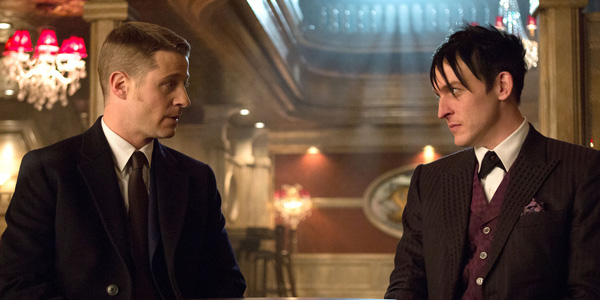 Gordon has to go to the one person he does not want to be indebted to, the Penguin on an all new Gotham.

A killer takes out a drug dealer, and then a witness inside the GCPD interrogation room. The cases send Gordon on a quest to track down the crooked cop behind the killings. Every turn is blocked, and he has to make a decision, give up or play outside the law. It leads him to the Penguin’s new club, forcing him to make a deal with the new crime boss. Penguin sends his new lackeys after the killer cop, and comes up with the jackpot, the murder weapon and confession. All in a neat bow, putting Gordon on the wrong side of the law this week. Gordon is tries to take down a murderer and takes a stand on the squad room floor, drawing lines with in the GCPD.

Fish is also saved from torture by Butch, just before she almost lost her knees. She is determined to find Penguin for ratting her out. She is able to track down the Penguin, but is almost taken out but a Falcone hit squad. She is able to escape, but Butch is caught by forcing her to turn to Bullock to escape the city.

After a Wayne-less week, Bruce returns looking for Selina. Looking around the city a a bribe to Ivy, got Selina back to Wayne Manor. She pushes him away, but it is clear she is trying to keep him away to protect the young Wayne. He gives up on her, refocusing on his quest for his parents killer. It is sad to see the vibrant Bruce go dark again so soon.

The show moved well this week, the problem is there are laughs where there should not be within the show. Gordon and Bullock come off slightly comedic because of the over the top lines. The show keeps trying to build, but there is just something missing. So even with the season 2 renewal, how may of you Bat-fans are going to stay?