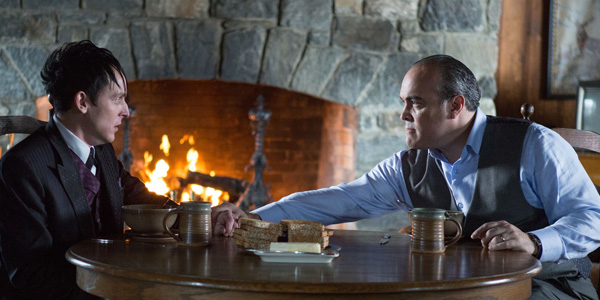 The birth of another villain is born and the Cobblepot seems more cat than bird, escaping death once again on this week’s Gotham.

This week’s show started with the start of the Crane’s family obsession with fear. Gerald Crane is a serial killer, torturing those with phobia’s and killing them at the height of their fear and taking their adrenal glands. It took Gordon and Bullock the whole hour to figure it out, but by the end they were on the trail of the killer. Crane was using a phobia support group to look for his victims, able to learn all about them during the meetings.

Gordon is slightly distracted this week with Dr. Thompkins, using cases to ask her out. By the end of the hour the two are an item. This is a departure from the comics, but she is one of the better actors of the show. Much more natural and to over the top like some others. Hopefully their relationship will continue and she will be a much bigger part of the show.

Penguin took up most the rest of the show, losing his position with Maroni. While having a drink with the double agent, Maroni gets a call from Fish telling him all about Falcone and Penguin. Maroni takes him on a road trip up to a cabin to confront him, and finds out for sure the Penguin has been playing him from the start. After Penguin tries to kill Maroni, he is beaten and almost crushed in a scrap yard car crusher. Once again he escapes and heads back to Gotham.

Nigma also as a few fun moments showing off his dark side, and Bruce is starting to turn away outside help.

Next week’s show looks a little more exciting with the inspiration for both the Bat and the Scarecrow. Let’s just hope a cup of water is not another villain’s downfall.