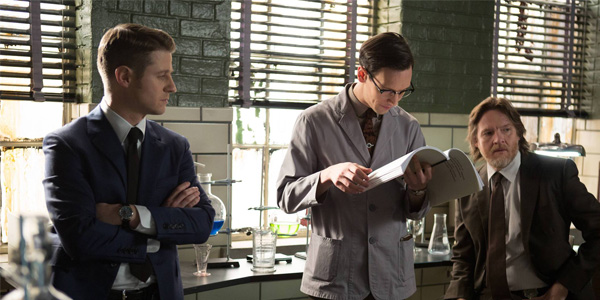 Gotham’s king of fear is born in this week’s Gotham.

The villains continue to be introduced, and their paths are assured by the actions of Gordon and crew. The hour is spent on both Crane and Penguin, show both of them growing into the villains of our present.

Penguin got a bump from Falcone, getting Fish’s club and a real position with the family. He reopens the club as Oswald’s, but how long before it becomes the Iceberg lounge? His position in the city seems unsure, and it looks like he won’t last despite what we know about the future. Will he really become the gangster of the city, or will the rewrite history for this show?

Gotham’s finest are on the trail of Crane, and discover why he is killing. Crane is trying to get rid of all fear, his own and others. He is taking the adrenals form his victims and turning into a serum that will trigger intense fear, and the ability to get past it. Trying it on  himself first his next subject is his son Jonathan. With Gordon and Bullock closing in Crane is forced to rush son’s last treatment, causing permeant damage. When Jonathan was injected he was under a scarecrow in a field, cause that image to be his ultimate fear. The doctors are not sure if he will ever overcome it, giving a start to the obsession with the scarecrows for the young Crane.

While the Penguin rises and Crane goes insane, Bruce and Fish start off on a new chapter. Fish finds herself locked in a prison, and take over in her first few days. Bruce on the other hand is looking through the woods, coming to grips with the loss of her parents.

The next episode looks like the birth of the Joker, as a fanboy I’m excited, but is it too soon. This show is supposed to a timeless version of Gotham, but the mix of cell phones and microfiche is jarring. And can these villains really start with out Batman as a catalyst?