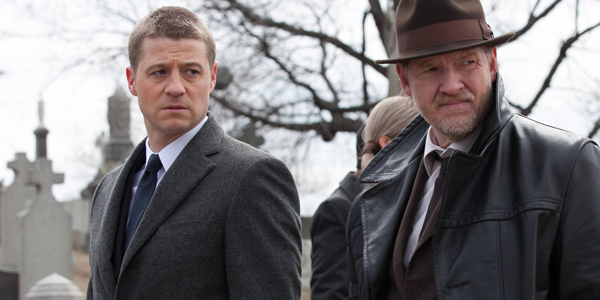 Gotham starts tonight on Fox, giving a look at the city and people that helped create Batman.

The pilot for Gotham has been met with mixed reactions from fans and critics and after seeing the show, I understand their reactions. After watching Arrow for two years most fans are spoiled by great action, mixed with just the right amount of comic references. Gotham is not as neat as Arrow, making it a little harder to like right away.

What most fans forget is this is a pilot, not the season finale– it was made early without the full backing of the network. They tried to fill it with as much as they could, and that is where the show was lacking. Most of the “cameos” in the show are forced, making them feel unnecessary. I understand wanting to knock things out of the park in the first episode, but having also seen The Flash pilot, the Gotham team should have shown restraint. Comic nods are fine, but they filled this episode with too many Bat-characters too soon. The dialogue was also a little cartoony, it is clear that the they are not sure how to take the show. It moves back and forth between drama and comedy, but clearly has not found it’s rhythm.

Ben McKenzie does a great job as Jim Gordon, delivering just enough boy scout to survive in Gotham. Donal Logue also is the perfect Harvey Bullock… he has the right age and look for a beaten down cop, who is just trying to get by in a dark city. The relationship between them is clearly the glue of the series, given time they could be just as compelling as Bruce’s journey toward the cowl. The “villains” of the show don’t have much depth clearly showing off their gimmicks in the episode. Having their future hidden would have made for a much better intro to the audience. We know Edward Nygma is into riddles and is weird right off the bat (pardon the pun), not leaving much room for him to grow as a character. The same goes for Ivy, Selina Kyle, and Oswald Cobblepot, leaving me to wonder what will they do with them other than make them gags in the show, rather than fleshed out characters.

Hopefully they will focus more on Gordon and Bullock in the future, and will slow down the development of  the young villains through the series, not the season. The show has potential, but they have to cut back on the comedy and make it a little more serious for it to last Fox’s fall chopping block.