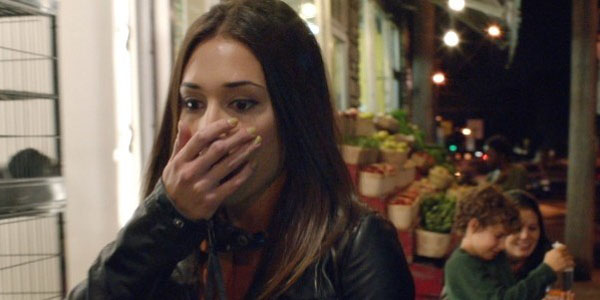 The monster house is finally starting to feel like a home again this week in SyFy’s Being Human.

When we last left our trio they were in big trouble, Josh was becoming a wolf again, Aidan was dying, and Sally was decomposing. This week things get a little brighter for our monsters.

Up to this point every wolf except Josh has had it in for vampires, until this week. A traveling werewolf set up camp in Nora’s woods. After her change Nora bumps into her first vegetarian wolf, Pete. After chatting for a bit they part ways but we get to learn more about Pete through the episode. He shows up at the monster house with a pot of chili and wine. Pete tells the couple his stories of life as a wolf, and find out he had vampire friends and embraces the wolf, not fearing it  and not using it as and excuse to be savage. It opens up Josh’s eyes that being a wolf may not be the curse he has thought about it . He even learns to meditate and talk to his inner wolf a control and peace he has never had in his life.

Sally on the other hand is falling apart, her tooth brush went right through her cheek. Her raw meat cravings did nothing to prevent her decay, so when a mouse presents itself she eats him curing her pealing. She goes to talk to Nick and finds out his secret, feeling better on her way home she stops at a pet store but her craving scares her when she looks at a little kid with hunger in her eyes. Will her hunger get the best of her or will she become a ghost again by the end of the season?

Finally we find out more about Aidan’s old life during the revolution. We see that his wife knew about his condition and embraced it but wouldn’t join him. She also bares a striking resembles to his current crush, Kat.

Josh fills Nora in about Aidan’s rescue and how Aidan took the blame for Brinn, taking the burden off Nora and protecting her from Liam. She might finally be seeing what kind of family she is joining in the house. As Aidan starts to die with Josh and Sally at his side, he has a sudden seizure and when he wakes up he is all better. It appears that while drinking werewolf blood may hurt in the short term, it is the cure for the virus.

Will the vampires take back Boston with their new cure? WIll Sally give into her inner zombie? Well josh control his wolf finally? With only a couple more epodes things may happen quick in the monster house.